A + A // Silverfish + Stuff Siblings Say 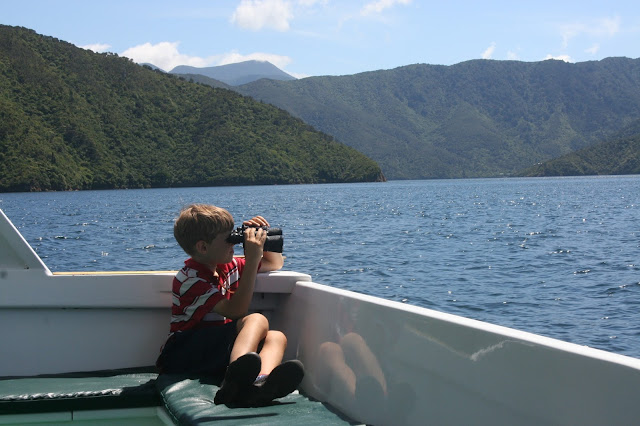 Caleb admiring the scenery in the Queen Charlotte Sound, up near Picton

Awkward:
- Running around a corner in your house full-tilt only to nearly collide into one of your siblings who just happened to be running full-tilt around the same corner in the opposite direction. And not being able to say, "It's so dangerous to run around corners!" (like you usually would in this situation) because you were running around the corner too. :P

- When you meet someone at something you were completely not expecting to meet them at and there's that mutual "oh wow, this is awkward, what do I say?!" moment before you both recover.
- When you stay in a holiday house that happens to have silverfish so every. single. item you took on holiday has to be shaken outside before it can come back into your regular house. Every item. Takes FOREVER.
- Awkward endings to conversations.
- Getting lost in a pair of shorts while trying to put them on. I somehow manage to do things which probably no one has ever done before.
- A package that arrives in the mail that has been wrapped so, so well it takes quite a bit of time and ingenuity for you to eventually be able to open it.

Awesome:
- Looking around you at your life and thinking, wow, I have been ridiculously blessed far, far beyond what I deserve. To be honest, I don't think there is anyone on this earth who couldn't say that, no matter where they are or what their life looks like.
- Little siblings who say the most hilarious things ever
- The sound of cicadas chirping merrily outside.We live in a subdivision that is semi newish and the cicadas and other insects are only just starting to arrive.
- Fresh strawberries from the garden!
- Old photos
- HITTING 100,000 VIEWS ON MY BLOG!!! WAHOO! Here's proof right here (screenshot captured on the 26th of February 2016):

I didn't manage to capture the moment while it was on the exact number, but five views later is near enough, right? :)

- Meeting up with relatives and friends that you haven't seen for ages. Granted, it was because of Grandma's funeral which of course wasn't quite so awesome, but the good thing about funerals is that everyone gathers from near and far.

- Valentine's party fun. We had a family dinner that was awesome. We made encouragement certificates for each other and did a game called a 'Love Bath' which Mum created especially for the occasion. (Can you tell this post has been sitting in my drafts pile for a while?)
- New blank books... so exciting seeing yards and yards of unlined, unwritten-on pages!
- With that being said, old, full books. It is really neat to look back on your work (whether it is an art book, a school book or a finished diary) and remember filling each page. So many memories!
- Doing fun things as a family.

Do you grow strawberries?
What sounds make you think of summer?
What is the most awkward thing that has happened to you this week?

Bonus question: I'm tossing up ideas of something fun to do with my friends for my 18th birthday this year. Do you have any brilliant ideas or inspiration for me? I'm kind of stuck...