New Zealand has been in the middle of a big drought. There were one or two little rains throughout that time (you know, where it dribbles and you think "Oh, I hope it will rain!" and it doesn't rain properly, just kind of dribbles and spits for a while then clears up) until yesterday. In the morning it kind of dribbled a bit... then it cleared up.... then in the afternoon the rain clouds rolled over.... and in the evening it started raining! I think it rained most of last night and today it rained a little.

All the farmers throughout New Zealand will be so pleased. Finally- it rained!

God's so good to us. You know, it would have been almost as bad as the drought if it had rained, like, A LOT. Because the dry and hard ground would have not been able to soak up any moisture at all and it would have flooded really badly! But instead He sent a little rain, enough to water the parched ground and please the farmers, but not enough to cause trouble.

That reminds me of a poem about rain. Hardly the level of rain we had, but I'll post it because it's funny.

Rain (I think it was written by Barry Crump but I am not sure and nothing on Google disagrees or agrees!)

After a drought of half an hour
We had a most refreshing shower
And then the most curious thing of all
A gentle rain began to fall.

Next day was also fairly dry
Save for the deluge from the sky
Which wetted the party to the skin
And then, at last, the rain set in.


I was also thinking of several Bible verses about drought and rain. They are in the NIV version.


“But blessed is the one who trusts in the Lord,
whose confidence is in him.8 They will be like a tree planted by the water
that sends out its roots by the stream.
It does not fear when heat comes;
its leaves are always green.
It has no worries in a year of drought
and never fails to bear fruit.”
let the clouds shower it down.
Let the earth open wide,
let salvation spring up,
let righteousness flourish with it;
I, the Lord, have created it." 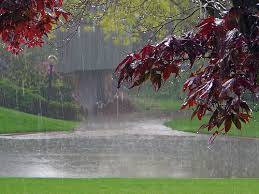 “You heavens above, rain down my righteousness;
let the clouds shower it down.
Let the earth open wide,
let salvation spring up,
let righteousness flourish with it;
I, the Lord, have created it."

May the Lord bless you and your family and friends in all that you do!