The Day I Jumped Out Of an Aeroplane

Last Monday I went skydiving. I jumped out a perfectly good aeroplane and plummeted towards the ground far below, reaching terminal velocity at around 200kph.

Now, it may seem like a very scary and maybe even a strange thing to do but it’s something I’d been wanting to do for a very long time. And I’m so glad I did it. Let me tell you all about it.


I had been wanting to go skydiving for a very long time and I decided late last year that I wanted to do it sooner rather than later. So I found a brave friend who wanted to come skydiving too and we booked our trip for Monday the 23rd of February at 9am.

Skydiving is renowned for being a very expensive sport. But it doesn’t actually have to be too bad. I saved up for a while and we ended up doing an ‘el cheapo’ skydive—only 6000 feet, which is the lowest altitude you can do, no extra expensive professional photos or videos, and on a Monday  morning—the cheapest time of the week.

Our skydiving trip was booked for Monday the 23rd of February at 9am. I woke up bright and early that morning, very excited and maybe just a little bit nervous. The adventure was about to begin! Unfortunately, though, our excitement was put on hold because we were all ready to go and were actually about to head off when we were phoned by a lady from Skydiving Kiwis, which is the place in Ashburton where you skydive, who told us that because there was a lot of low cloud we couldn’t do the jump! She rescheduled it for 10:30 that same day. And so we waited.

And then when we were about to leave we were once again told it was postponed because the low cloud still hadn’t lifted. The lady said she’d ring back at 12:30 and let us know what the plan was. So we ate our lunch and tried not to feel too terribly impatient and waited for the phone call. Eventually we were rung to say that it was definitely on and could we please be at the aerodrome at 2pm….for a skydive! So the family got into the van and we set off. At this point I was starting to feel quite nervous. But my emotions were mixed because we’d been waiting ALL morning for this moment and I was very excited we were finally going to jump. Or so I thought.

So were running a bit late and we got to the aerodrome at about half past two. We went inside the building and filled out a form and watched a video of someone else skydiving. The video did funny things to me. It looked like so much fun and I couldn’t wait to do it. But I think it had all seemed surreal and watching the video made it sink in – the enormity of what I was doing. I, Bonnie Joy, at the age of 16, going on 17, was about to jump out of an aeroplane. Woah!


On the wall underneath the TV they had this framed quote: “If at first you don’t succeed, don’t try skydiving.”

After the video we were told that there was still some low cloud so we had to wait. In the hangar there was a ping pong game and a pool table so we played some games for a bit and wandered around looking at everything, trying not to feel freaked out. Filling in time - the aeroplane on the left is the one we jumped out of!

I think it was when our skydive was postponed YET AGAIN that I started to feel a lot less nervous. We were told to come back at four o’clock in the hopes that the cloud would have lifted by then. So we went to the playground in Ashburton and eventually rang Skydiving Kiwis at four to see what was happening. We were told they wanted us to go back the aerodrome. So we did, got there and discovered that This. Was. It. We were going skydiving!

There was another lady there who was skydiving from 12,000 feet high (we were only jumping at half that height.) So she went up first with all her gear on and we settled down to wait a bit longer. I didn’t mind the waiting too much because it was going to happen! Sooner than I thought, in fact.

The lady who had been going to jump from 12,000 feet had to come back down again in the aeroplane without jumping. Christchurch radar had busted, leaving every aeroplane in Canterbury with no radar monitoring! This was a massive disaster. However, it sped up our skydive because we were only diving at 6,000 feet which is not in the commercial airspace, which meant we could go ahead even though the other lady couldn’t for the time being.

So it was all go for our skydive.

It happened so fast from then on. We were given jumpsuits to put on and then harnesses that went over the top of the jumpsuits. Then we were given a little talk on how to jump out of the aeroplane and what position to take during the freefall. We were then escorted out to the plane and we took off from the airstrip. I’m not quite sure why, but for all of this, I didn’t feel nervous at all. I felt very excited but very calm, which puzzled me because I had assumed I’d be freaking out. And I wasn’t. It was sort of weird! 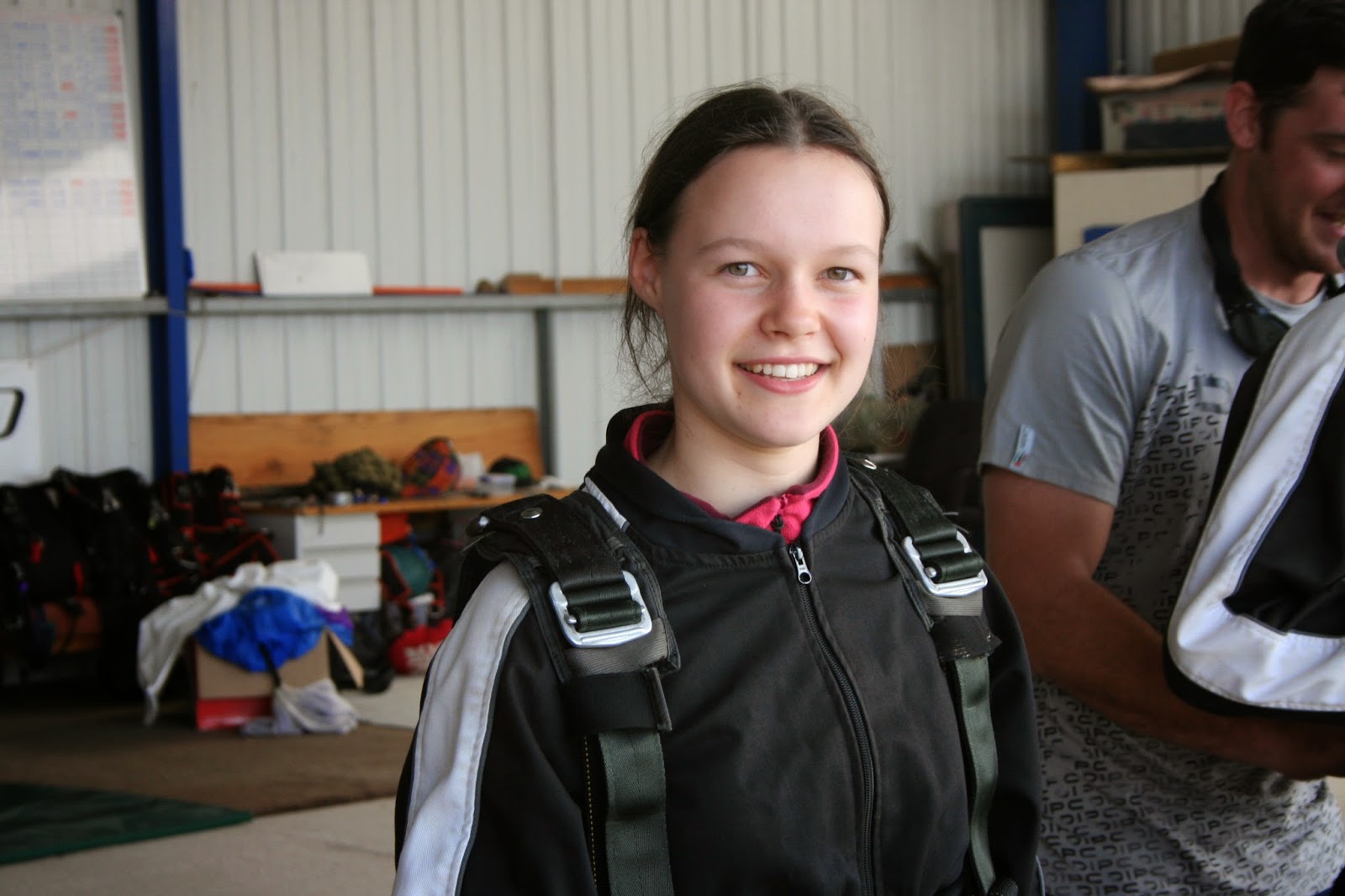 During the safety talk

In the aeroplane it was very cosy. There was the pilot, the two of us skydiving and our instructors (both of us were doing tandem skydives) which was a total of five people in a tiny little plane. We kept on going higher and higher and the ground looked further and further away. 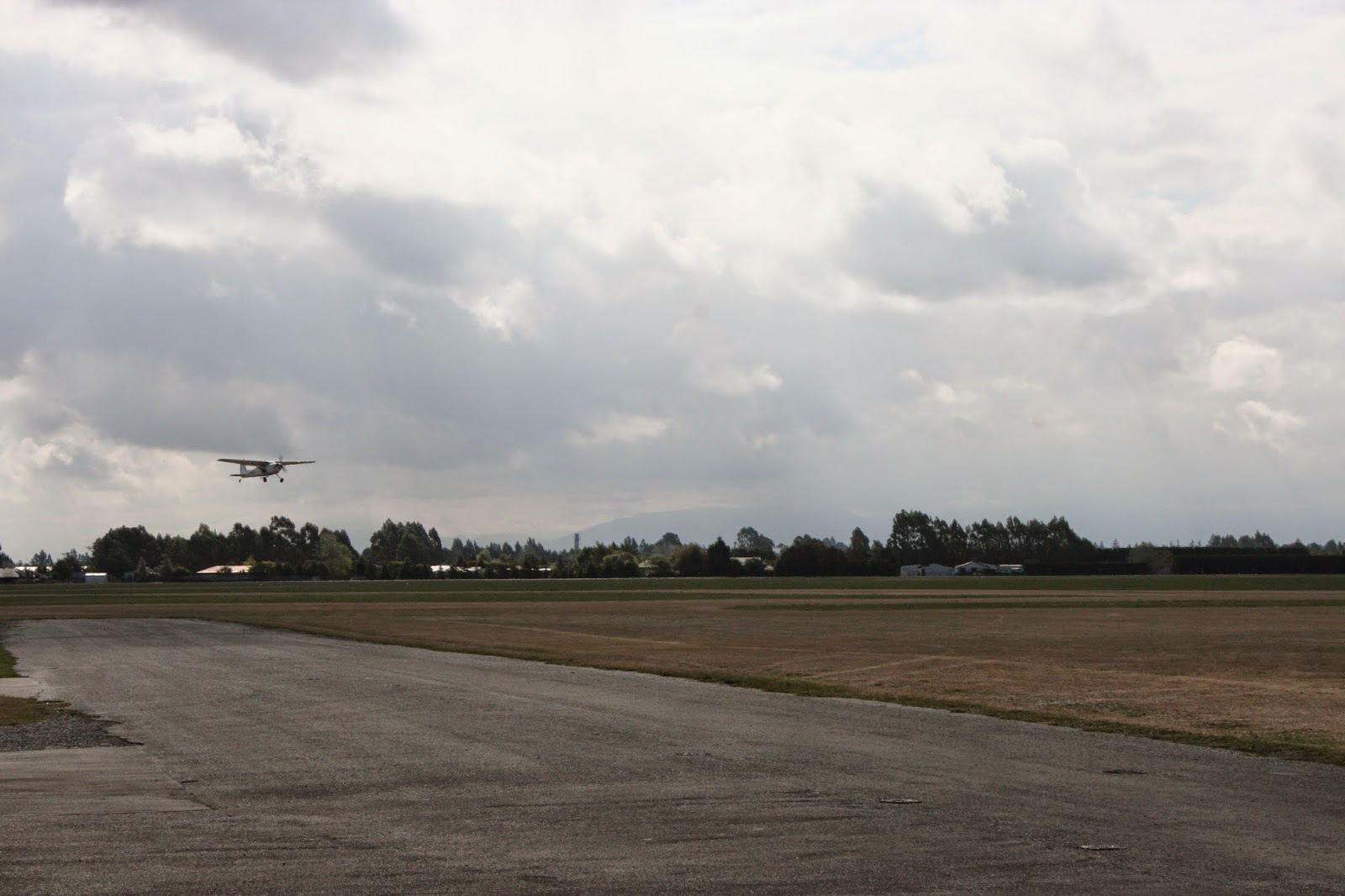 This is us in the plane, taking off

The plane ride was very short. All of a sudden I was pulling my goggles down over my eyes and listening to some final advice from my instructor who was by now strapped securely to my back. Then he opened the door and we put our feet and lower legs out of the plane. I could see down. All the way down. To some clouds far below. And the ground even further below. I knew we were about to leap out. I put my head back, curled up my legs and crossed my arms as I had been shown. I felt so cool and collected about the idea of jumping out. Right up until the moment when we actually left the plane. It was FREAKY.

As you jump out, your breath sort of catches in your throat and you feel like you are falling (that's because you are). And I was terrified. For about two nanoseconds. Those feelings lasted a very short time and I was quickly able to breathe again. I looked down as we were falling and remember thinking, “this is so much fun!” Then suddenly the parachute opened and I was allowed to push my goggles up and relax as we floated in the sky. 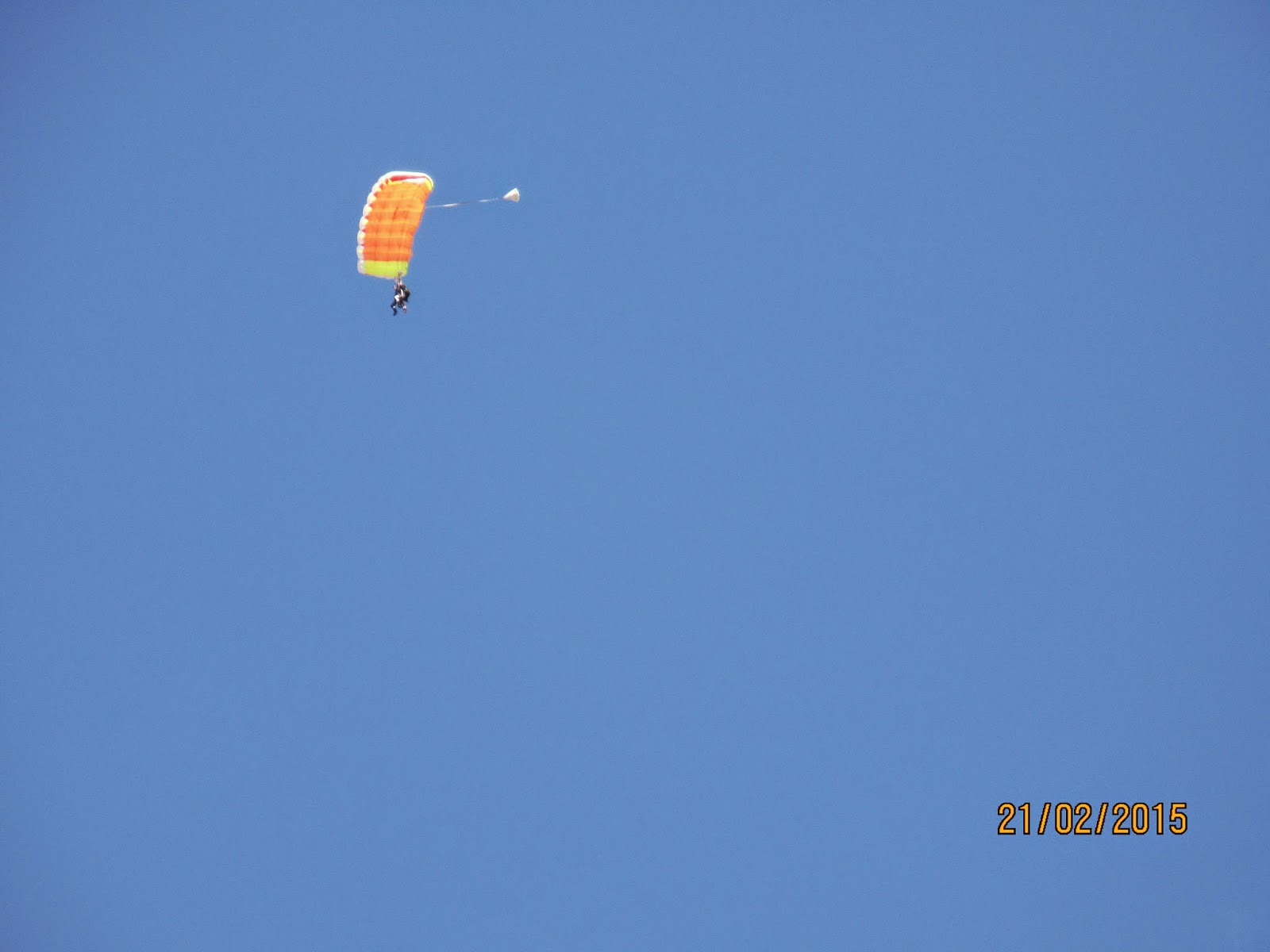 There I am, underneath the orange parachute :) 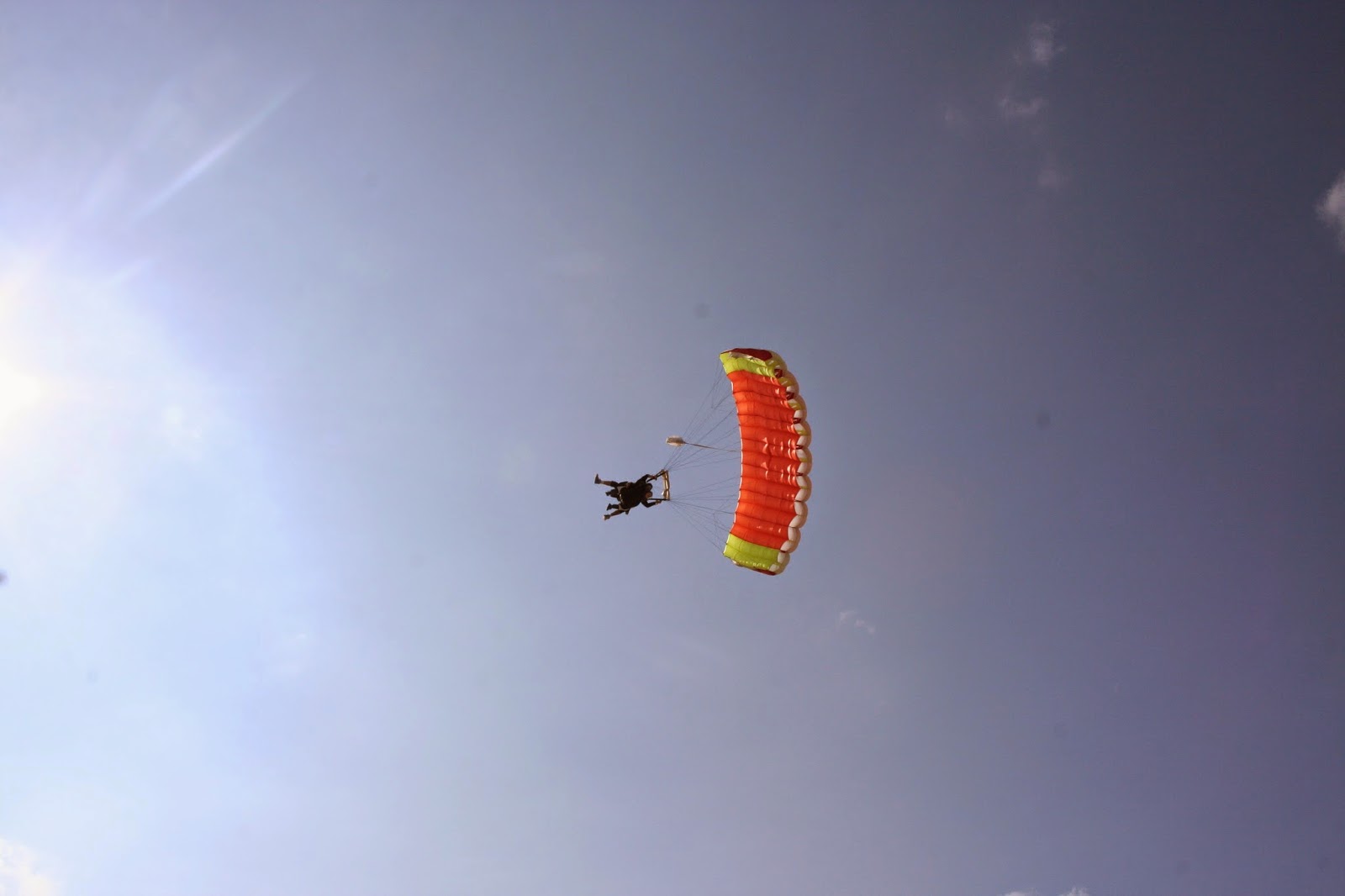 This is my favourite photo :) 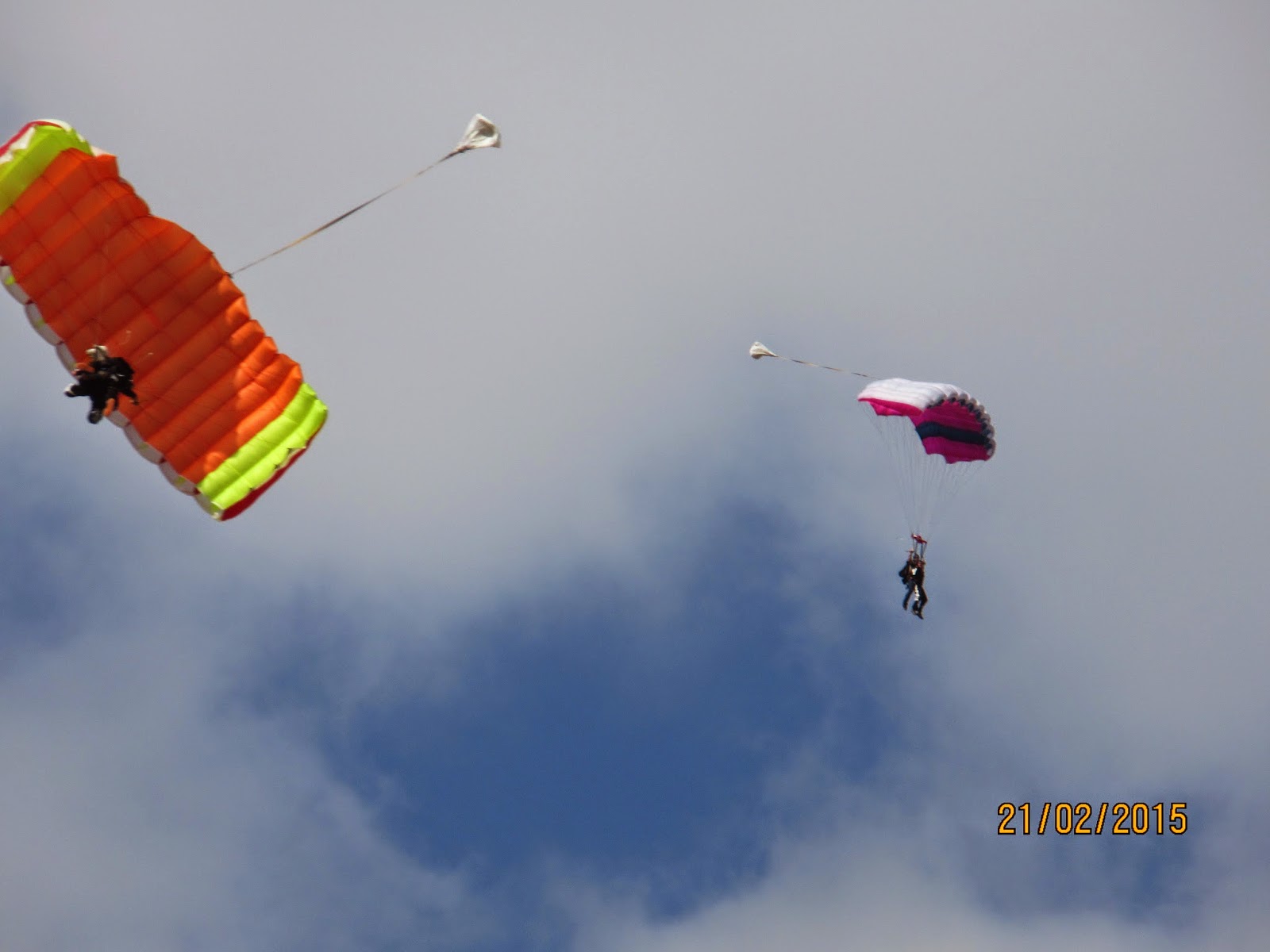 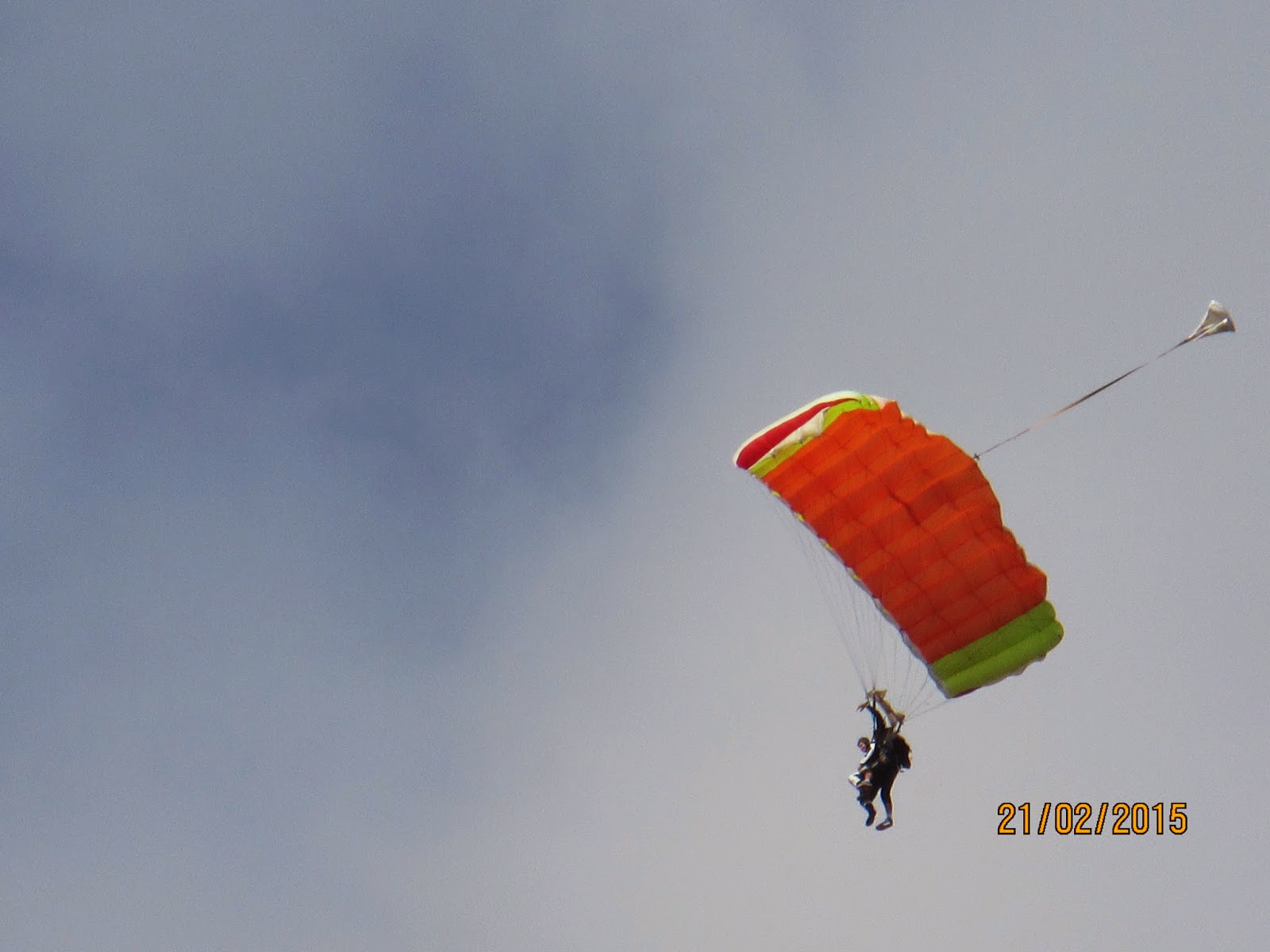 There’s no feeling quite like that of hanging in a harness underneath a parachute, watching the world come closer beneath you. It is beautiful. Amazing. Indescribable. As we floated down we did some fancy spins and stuff which lost us height pretty quick. My instructor pointed out the aerodrome below us where we had taken off in the aeroplane. I could see my family outside the hangar. As we got lower in the sky I could see that they were all looking up at us and waving. It seemed surreal.

I was surprised and disappointed how short the parachuting bit lasted. All too soon I was being told to keep my legs up as we did a final spin and then came in to land. 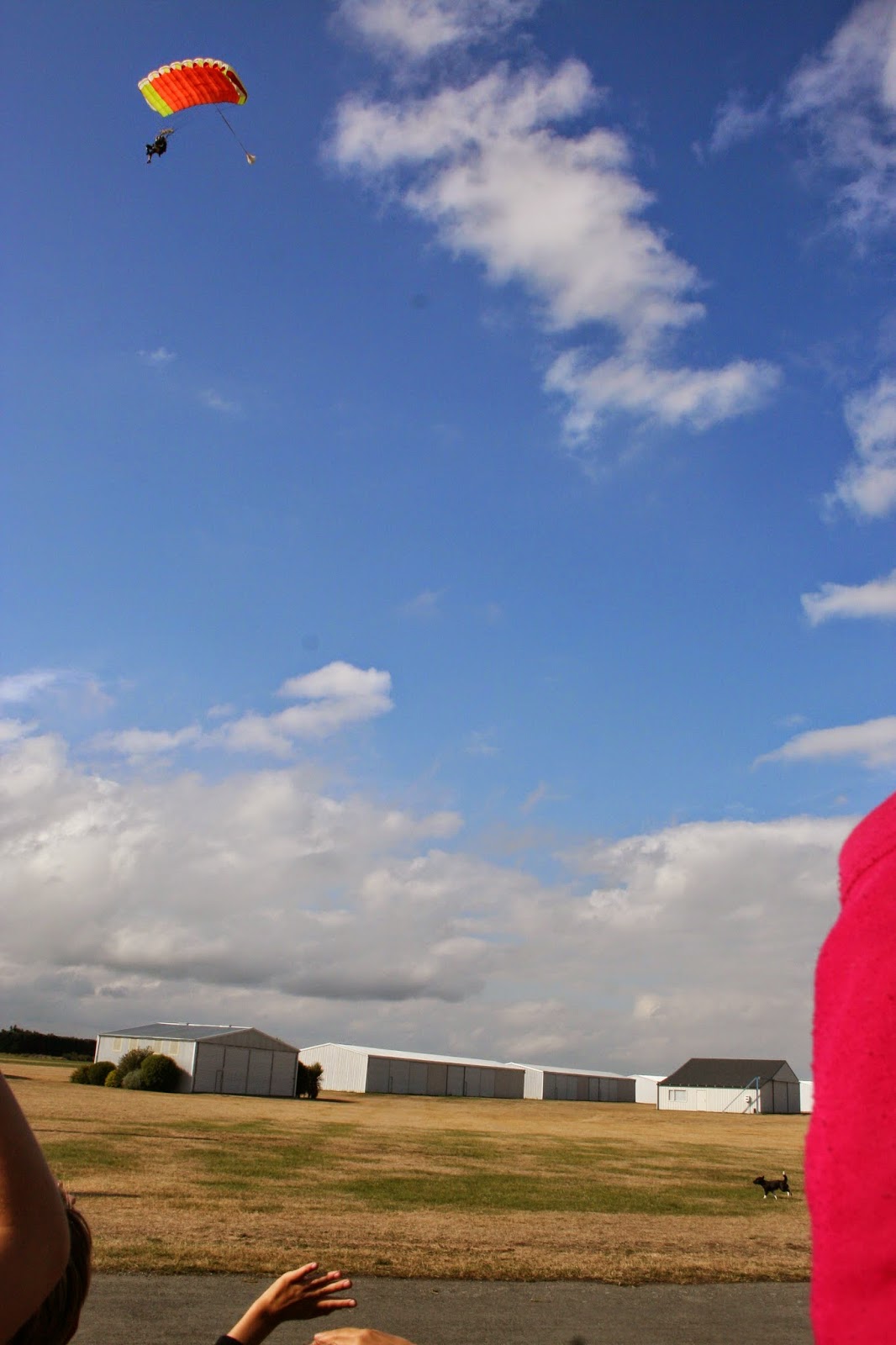 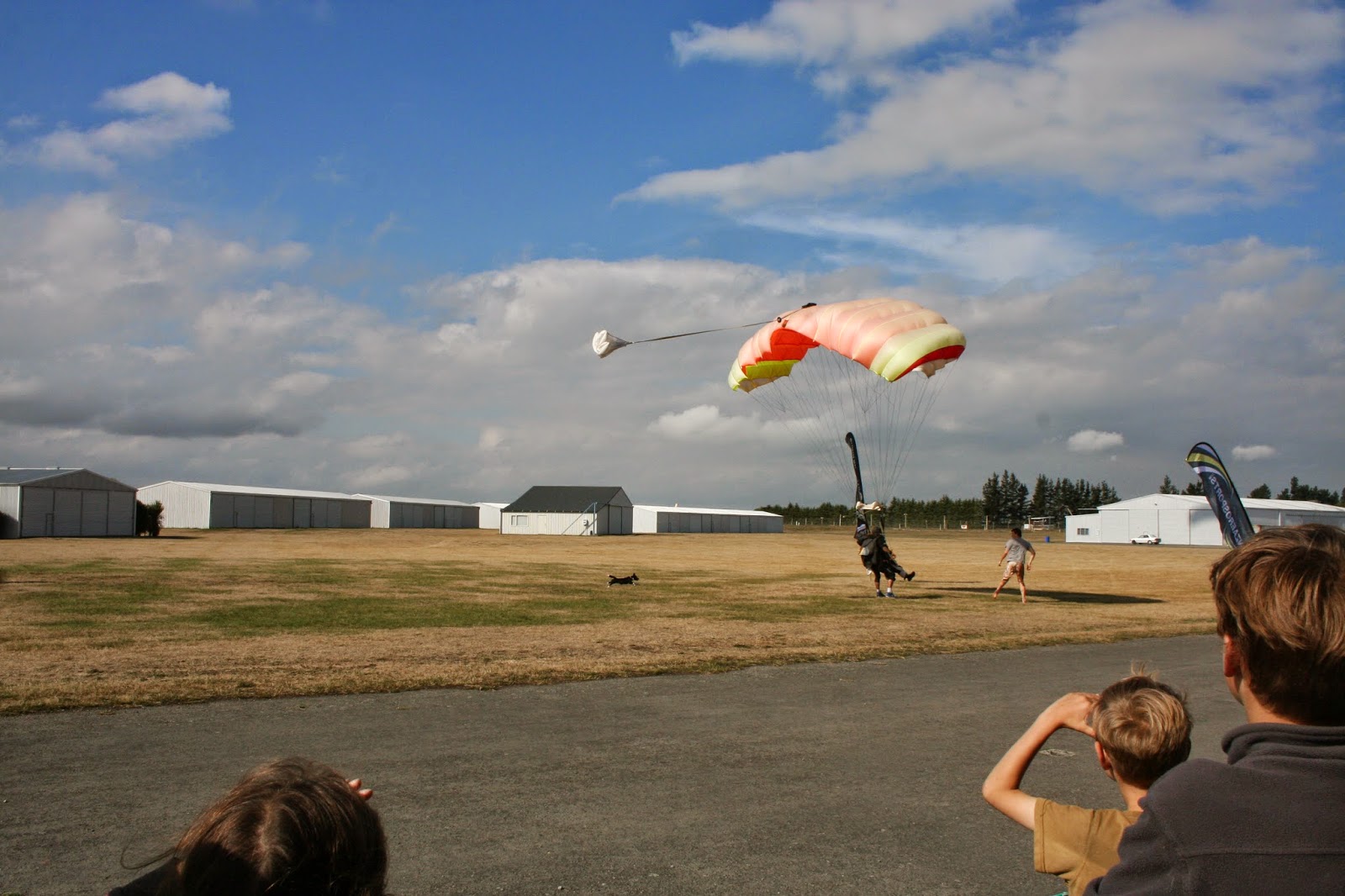 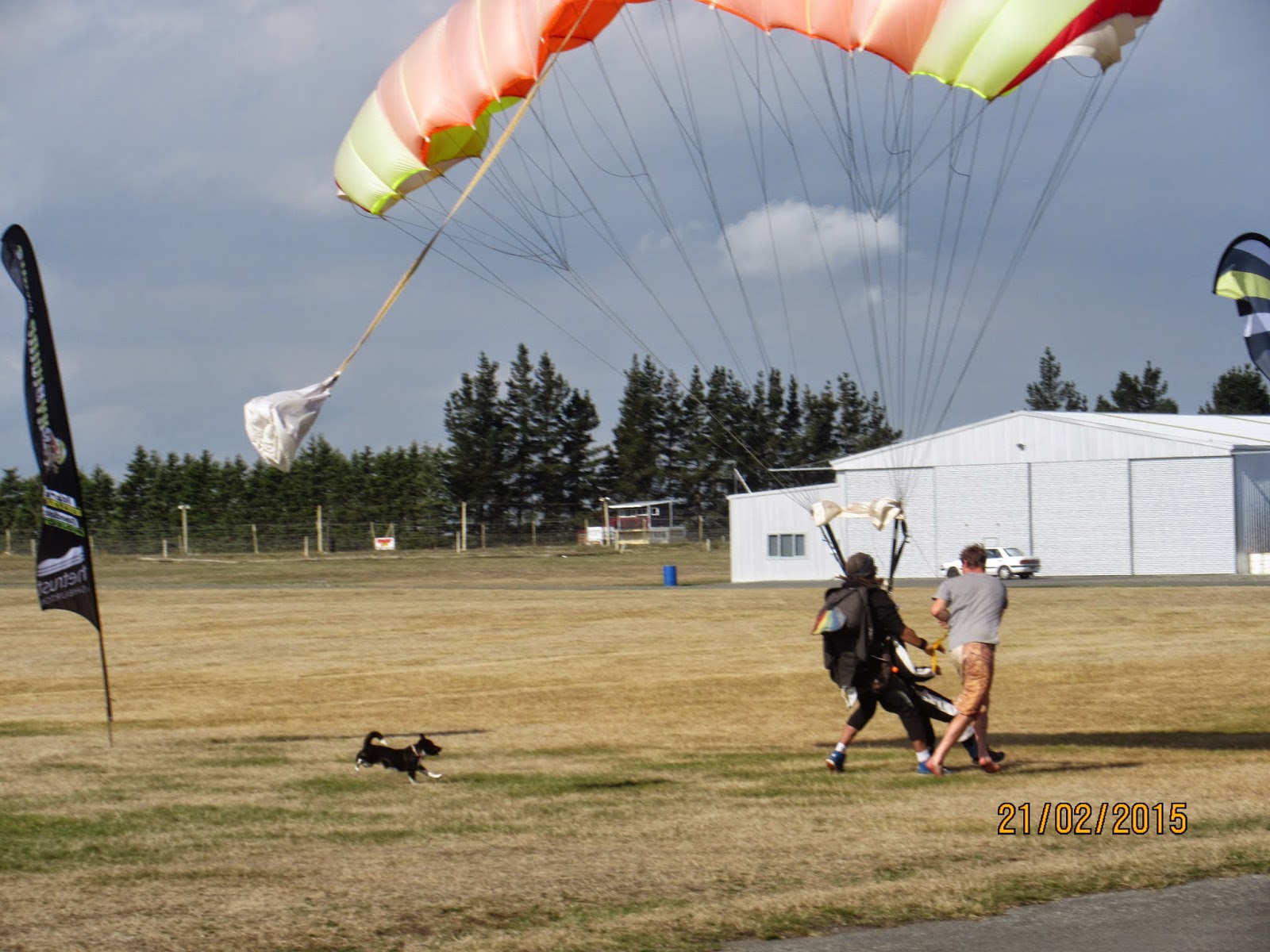 And that was it! We took off our harnesses and jumpsuits, were presented with certificates to prove that we’d done it and then got into the van and drove home. 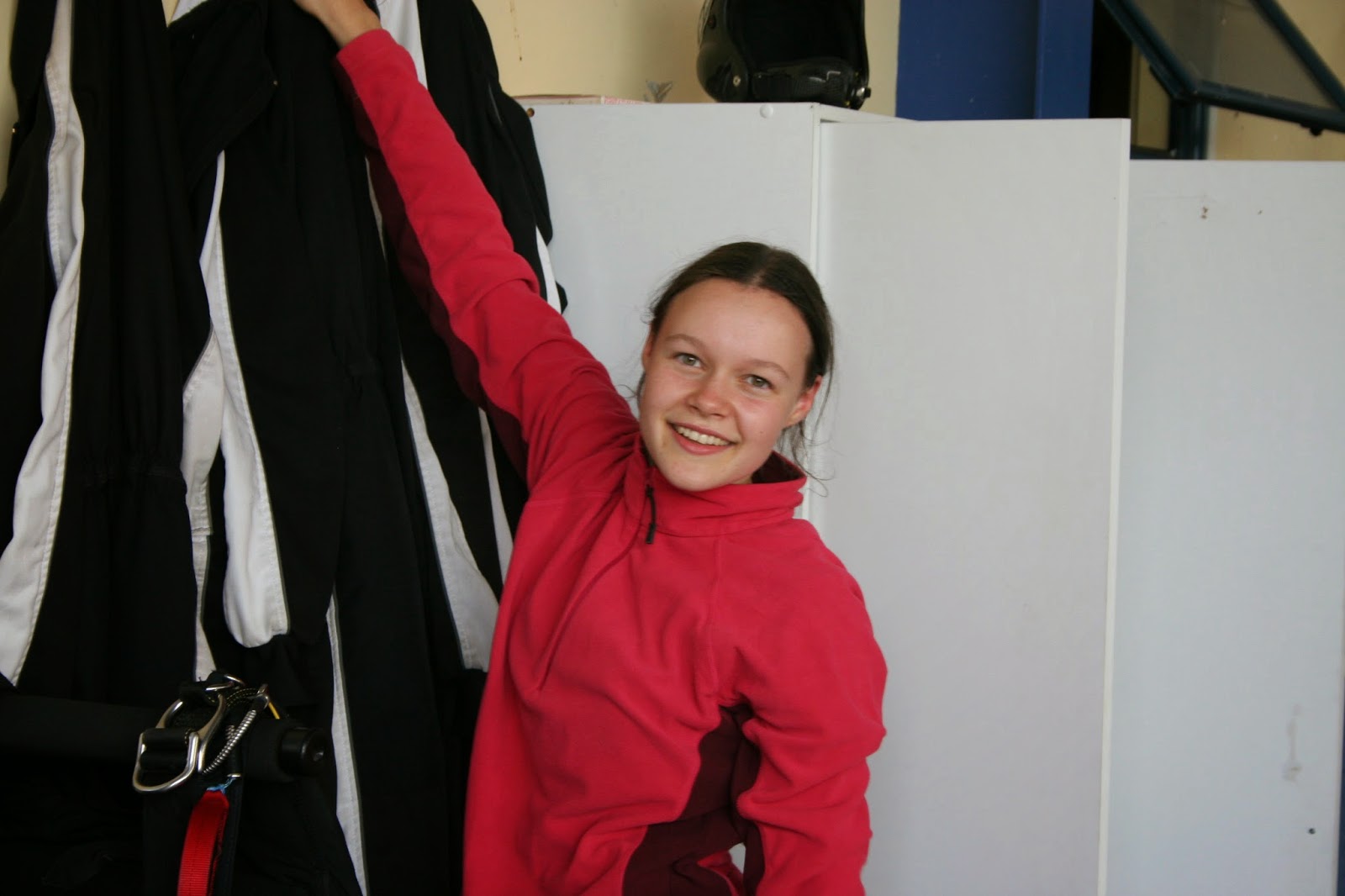 Hanging up my gear afterwards

I think that skydiving is definitely one of the most scary things I’ve ever done. But also, definitely, one of the awesomest* and most exciting. It was an amazing experience.

If you’ve been thinking about going skydiving, my recommendation is to go for it. It’s definitely worth it and very fun.

Well that's about it from me! If you have a question for me about skydiving, leave it in a comment below and I'd love to answer it.

*EDIT: I've been told 'awesomest' isn't really a word. But I'm going to leave it in there anyway. You know what I mean, right?