This post will probably seem incredibly flat considering the exciting news I posted last! Ah well. That's how it goes.

Danella just came in and offered me a piece of her delectable slice she made on Sunday. She couldn't remember the name of it when I asked her. :-( So I'll just christen it 'Danella's Delectable Caramel Slice'. There. How does that sound? It looks a little like this: 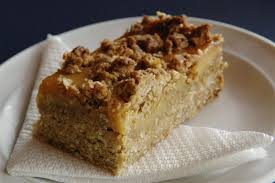 Although admittedly it's not quite as thick. And not the same colouring exactly. But it's the best Google images could do, so you'll have to be content with that.

I was down to Chair the Impromptu session. Basically, you have to think of topics, then assign them to the speakers and they talk on that topic for 1 minute. Well, my Impromptu session was going to be on Announcements. Each speaker would be given an announcement (for example: The aliens are invading earth or There's no more flour in the cupboards) and they would have to ANNOUNCE than announcement to the rest of Tecorians. Because you could easily state the sentence then sit down, the challenge was to make it interesting. State where, when, why, how, who etc. Make it last for a whole minute.

And that's not all! You also had to do it in a certain style. For example, Bob might be asked to announce that the walls of Jericho have just come tumbling down in the manner of a racing car commentator! Or in a melancholy manner. Or acting very happy. Or American. You get the picture.

So... I was going to get Dad to announce that his wife was having her tenth baby in a very fatherly style. Sounds okay, doesn't it? But I thought that people might just assume it was just for the Impromptu session, not true and that I made it up! Well, afterwards I was going to say, "Well, all of those announcements were false. I made them all up, and I don't think any of them were true! Apart from one. One of those announcements was true, and we're all very excited about it. Does anyone want to guess which announcement was actually true?"

So there you go. That was my plan. Sadly we didn't go to Tecorians (public speaking group) as I said above we got a vomiting bug. So that kinda ruined my plan. :-(

Yup, I reckon that's about it from me for today. It seems kind of rambly... sorry!