Who Was Kilroy, Anyway? 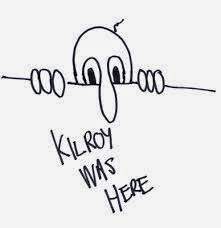 Have you ever seen any version of this popular graffiti image anywhere?

Kilroy. The cartoon bald head with that massive droopy nose and those big eyes peering over a wall. Those famous words: "Kilroy was here."

We (the children in our family) found Kilroy's signature one morning, sketched on the pad beside our telephone. Under interrogation it transpired that Dad had left Kilroy's signature to see what us kids thought about it. We had actually never heard of it before. So I set off on a hunt around the internet to Find Out About Kilroy.

Here's what The Straight Dope has to say about Kilroy and his appearances.

"Kilroy was here" emerged during World War II, appearing at truck stops, city restaurants, and in military boardrooms. However, the first appearances seem to have been on military docks and ships in late 1939.

"The mischievous face and the phrase became a national joke," according to author Charles Panati. In theory, he was a soldier, probably American, who travelled all over the world scrawling his immortal phrase. Clearly, the graffiti were scrawled by thousands of different soldiers, not a single one named Kilroy.

During the Forties, Kilroy was everywhere. Panati comments, "The outrageousness of the graffit was not so much what it said, but where it turned up." He cites the torch of the Statue of Liberty, the Arc de Triomphe in Paris, the Marco Polo Bridge in China, huts in Polynesia, and a girder on the George Washington Bridge in New York. There were contests in the Air Force to beat Kilroy to isolated and uninhabited places around the globe.

The appearance wasn't always of GI origin, although it was largely tied to the military services. More than once newspapers reported on pregnant women wheeled into the delivery room, with the hospital staff finding "Kilroy was here" written across their stomachs. Panati says, "The most daring appearance occurred during the meeting of the Big Three in Potsdam, Germany, in July 1945. Truman, Attlee, and Stalin had exclusive use of an opulent marble bathroom, off limits to everyone else. On the second day of the summit, an excited Stalin emerged from the bathroom sputtering something in Russian to one of his aides. A translator overheard Stalin demand, 'Who is Kilroy?'" SDSTAFF Mac suggests Panati is a better storyteller than a scholar, though.

There has been much written about the origin and proliferation of Kilroy.

In December 1946 the New York Times credited James J. Kilroy, a welding inspector at the Bethlehem Steel shipyard in Quincy, Massachusetts, with starting the craze. Usually, inspectors used a small chalk mark, but welders were erasing those to get double-paid for their work. To prevent this, Mr Kilroy marked his welding work with the long crayoned phrase ("Kilroy was here") on the items he inspected. The graffito became a common sight around the shipyard and was imitated by workers when they were drafted and sent around the world. As the war progressed, people began opening void spaces on ships for repair, and the mysterious Mr Kilroy's name would be found there, in sealed compartments "where no one had been before."

There are other origin stories, but they're less credible.


So, yeah. Did you find that interesting? Our whole family has gone Kilroy-crazy. Kilroy now has his signature across almost every piece of paper (and some other items, too) in the house. Who cares? I found that history so interesting! There's something so fascinating about Kilroy and his cartoon picture, anyway. :D