"Isn't this what I'd been waiting for all my life?!" 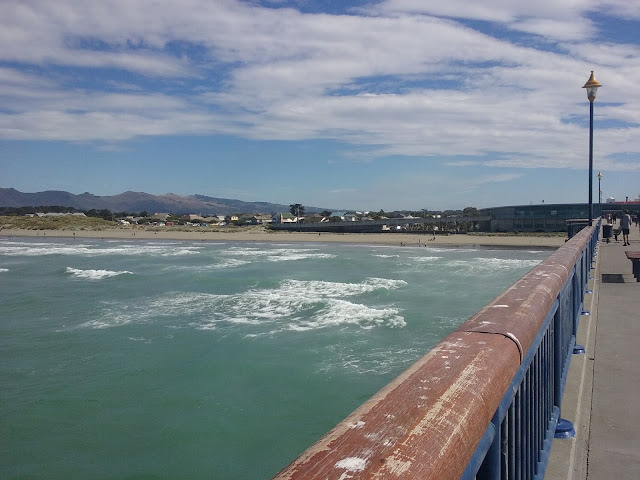 Sea and sky from the New Brighton pier

I don't really like sharing hugely personal information on this blog because something inside me wants to keep some things to myself. Some things are absolutely not made to be shared.
My experience with a young man was one of those- I wasn't going to share about it on my blog. But I've decided to share it today, not quite sure why, just thought maybe I would. Hopefully it will encourage someone.

It all started around about September/October 2014. A young man who I'd known (just as an acquaintance) for a couple of years started Facebook messaging me. For a long, long time, I thought (or tried to convince myself) that he was just being friendly. It wasn't until other people who were not family members started thinking something was going on between us that I eventually conceded that yes, maybe he was interested in me. He had started going to our Church and then my parents started inviting him home with us for lunch because they wanted to check him out (fair enough).

I really enjoyed spending time around him. He took me to a few things, most definitely not 'dates' but group things that we'd both been invited to and that it was convenient for him to take me to since he drove and I didn't. I found him really interesting to talk to and looked forward to seeing him.

He went away for a training course for a few weeks on either side of Christmas. I really missed him during that time. You don't really know quite how much someone means to you until they go away.

Over this whole time of discovering he was interested in me and then going away, I was seeking God like never before. I'd sort of been 'looking out' for the right person God had prepared for me for ages, but never actually thought about what I'd do if they turned up!!

What if he was going to end up being my husband?
What if he wasn't the right one?
What if I was doing the wrong thing, getting involved in something that wouldn't work out?
But wouldn't it work out? Why shouldn't it? Isn't this what I'd been waiting for all my life?!
What was God's will in the situation?
I didn't know.

It was a really faith strengthening time. I really wanted to know God's will in the situation and I really had to trust him that he would show me his will, because it wasn't clear for quite a while.

Anyway, the young man arrived back from his training and it became very obvious that things were progressing quite speedily towards a relationship. He never said anything to me about it, but it was obvious. It just was.

I'd talked with my parents about it a lot, and also with a few other (mostly older) friends who I really trusted.

It was the beginning of March 2015 and I decided it wasn't fair to lead on the young man when I was having such doubts about the direction things were taking.
I contacted him and told him that I wanted to talk to him about something. We went for a walk and I told him everything that was on my heart. About how I wanted God's will for my life. And how that included the person I would end up marrying. About how I had prayed and sought God's guidance about the situation and not really gotten a clear answer. About how I didn't want to lead him on with him thinking I was approving a relationship when I wasn't sure.

He was really great about it. I had been so worried about having that conversation with him (because I didn't know how he felt!) but it all worked out great. We decided to have a two month 'break' as it were, to both of us seek the Lord and talk to some people about whether to end our special friendship completely or whether to take it into something more. We both wanted God's plan and that was the most important thing.

Part of the problem for me was that I'd allowed myself to get a bit emotionally attached. I really, really, really liked and admired this young man. He was (and is!) a lovely, kind, helpful, funny guy who is just really fun to be around. He's also a strong Christian and loves the Lord with all his heart.

I thought to myself, "But if I give this up, will there be anything else?? Is this my one opportunity for a relationship?"

It was really hard.

After the two months were up, we got together again. And decided that we would not pursue a relationship with each other (at least, not right at that time).

My reasons were:
- I didn't have any peace about it. After all the seeking of God I'd done, I didn't feel that pursuing it was right.
- My parents didn't feel that this particular relationship was right for me at that time. They advised me not to go into anything just at that stage and I felt like their advice was extremely wise.

I know I said this before, but it was really hard.

So we cooled it down. We're still friends, but absolutely nothing more than that.

I wrote about my opinion on what Christian relationships between girls and guys should look like back in June 2015. June was the month when it was probably the hardest for me, just fresh from saying goodbye to a relationship with this young man. Writing my opinion on relationships was really helpful - to remind myself of the reasons I'd done what I did and to caution against the biggest mistake I made, which was to get emotionally attached too early. I said in the post that I'd never been in a serious relationship, which was (and is) completely true.

At the beginning of this year, that same young man got involved in a relationship with a young lady I know. She is absolutely wonderful - so sweet, gracious, kind and, I think, probably better for him than I would be. I'm so absolutely thrilled for them both.

I've had cause to look back over the last year or so and go, wow, it was so hard. But I'm so glad it happened. I learnt so much. About myself, about God. Yes, it brought me a little bit of heartache and yes, there were times when I just about tore my hair out (!!) but oh, I learnt so much! And there was much joy and sunshine and fun in the process, too.

One particular moment sticks in my mind well. It was a couple of days after I had declined the relationship at that time. I was biking to work and I was a bit early so I stopped in a park on a bridge above a beautiful stream that I always love biking over. As I stopped my bike I was thinking about the last few days and asking God for some encouragement. Then I saw two big, beautiful white swans just floating down the stream. Now, I've stopped on that bridge many times and I've never seen two swans together before or since. I felt like it was God encouraging me - saying, "Bonnie, trust me. Don't despair. You might feel like you've lost your swan but it's not over yet. You can't see the future but I can. Trust me."

I was about to write "And that's the end of my story" when I realized that no, it isn't. My story is not over. That particular chapter of my life is over, yes, but then, so is all of my past.

The past is a great teacher.
That particular chapter of my life taught me this:
Trusting God isn't easy, but it's by far the best thing to do.

Lord, I trust you. May I ever learn to trust you more and more.