In my previous post, I mentioned a little about contentment and how God's been reminding me of it recently. As so often happens, when God decides to remind me of something, it's top of my mind for a while, so guess what's the only thing that came to mind when I decided to write a blog post?? Yup, you guessed it! 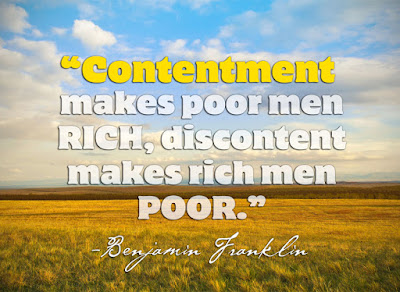 Contentment. It's a funny thing.

I think the thing about contentment that gets me is that I don't like change. I tend to dig my boots in a bit when it comes to anything new and a bit scary.

So when I've kicked up my wee fuss, borne the change and am settling in to my 'new normal', it's hard to find contentment.... because I'm too busy grumbling to myself about how much life would be better if I was back where I was!! (I know, it's dreadful isn't it.)

Discontent robs you of your joy in life.

Contentment is a state of happiness and satisfaction, as that useful dictionary definition above shows us. It's being content despite the circumstances. It's being happy and satisfied no matter what curveballs life throws at you.

I'm going to have to learn this at some stage in my life. Life has a habit of changing on you, just when you're getting nice and comfortable. I sometimes think of change as a little man who sneaks up behind you and yells in your ear, "Surprise!!!" You struggle getting to know him after that because even though he's a nice enough man in himself, you can't forget that initial shock he gave you. But then you eventually push past that mental barrier and get to know Mr Change and he's actually quite a nice chap.

As I was saying before I got sidetracked ascribing a personality to change, life has a habit of changing on you just when you're getting nice and comfortable. I'm going to have to learn to be content at some point! Because changes happen. And life goes on. And if I keep disliking change, I'm going to end up a very grumpy person to be around! 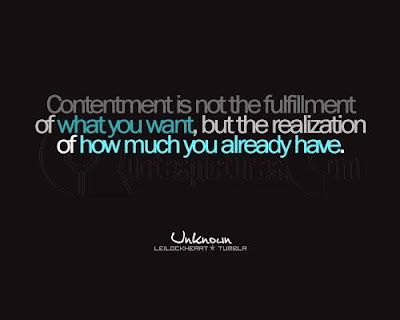 The secret to contentment (says me who is trying to learn this too!) is knowing how blessed you are. Like I said in the previous post, contentment is all about choosing to see the blessings in a situation and turning a blind eye to anything that we might grumble about.

Because if you choose to see the flowers and not the weeds, you'll enjoy your garden a whole lot more!

So here's Bonnie, trying to push past this mental block and embrace Mr Change when he taps her on the shoulder. I'll give him a hug right off the bat and see what happens, shall I?