One of the things that I learned on the camp I've just been at is absolutely amazing (well, all of it was, but this is especially good!) and I wanted to share it with you. So here it is. 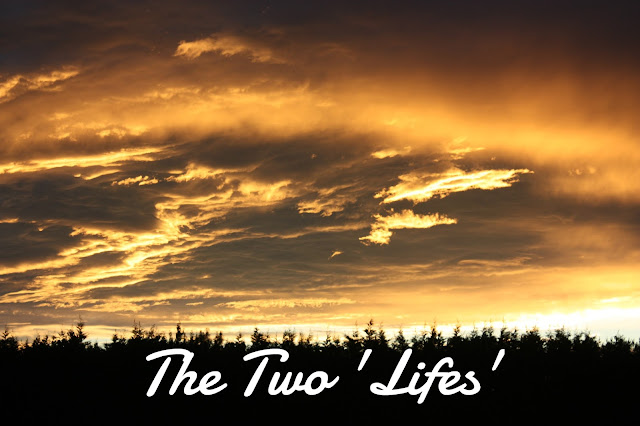 It's the bit I highlighted that I want to talk about today. How God breathed into Adam's nostrils the breath of life.

It's interesting that in the Genesis passage the word used is not the singular form, as it would appear from how it is translated into English. But 'chayim' is used. Which means lives.
So translated properly, the phrase should read, "breathed into his nostrils the breath of lives".

Breath of lives? Why on earth does it say that??!

Let's look at Genesis 1:29-30.
Then God said, “I give you every seed-bearing plant on the face of the whole earth and every tree that has fruit with seed in it. They will be yours for food. And to all the beasts of the earth and all the birds in the sky and all the creatures that move along the ground—everything that has the breath of life in it—I give every green plant for food.” And it was so.

Again, I've highlighted the bit I want to talk about.

Now this is really interesting. The Hebrew word used in this context for 'life' is 'chaya', which, as you'll remember, is the singular word. So it has been accurately translated here when talking about the animals, but previously, when talking about Adam, it should have been translated 'lives'.

What is going on here?

Let's think about the two** Greek words for life.

BIOS - refers to biological life. Has a very set time frame, a beginning and an end.
ZOE- used for divine life, or life of God. It doesn't have a set time frame. It is eternal, going on and on and on.

Isn't it interesting that God gave Adam 'lives', whereas he only gave the animals 'life'?

I'd like for us now to look at a whole bunch of New Testament Bible verses and think about which Greek word for life is used in each instance.

2 Tim 2:4 (KJV)
No man that warreth entangleth himself with the affairs of this life; that he may please him who hath chosen him to be a soldier.

Luke 8:14-15
The seed that fell among thorns stands for those who hear, but as they go on their way they are choked by life’s worries, riches and pleasures, and they do not mature.  But the seed on good soil stands for those with a noble and good heart, who hear the word, retain it, and by persevering produce a crop.


The Greek word used in each of the two above verses for 'life' is 'bios'. Remember, 'bios' refers to biological life. Keep that in mind, and have a look at these verses.


John 10:10
The thief comes only to steal and kill and destroy; I have come that they may have life, and have it to the full.

1 John 5:11
And this is the testimony: God has given us eternal life, and this life is in his Son.


The Greek word used in each of the two above verses for 'life' is 'zoe'. Remember, 'zoe' refers to divine life, the life of God, life that goes on for ever and ever.


Genesis 3:1-5
Now the serpent was more crafty than any of the wild animals the Lord God had made. He said to the woman, “Did God really say, ‘You must not eat from any tree in the garden’?”
The woman said to the serpent, “We may eat fruit from the trees in the garden, but God did say, ‘You must not eat fruit from the tree that is in the middle of the garden, and you must not touch it, or you will die.’”
“You will not certainly die,” the serpent said to the woman. “For God knows that when you eat from it your eyes will be opened, and you will be like God, knowing good and evil.”

We know that Eve ate the fruit that she wasn't allowed to eat. What did God say would happen to her? That she would die. And what happened to her? She didn't die straight away.

So God breathed two lives into Adam. Bios (human) life, and zoe (eternal) life. When man sinned, the zoe life was cut off from them. So they didn't die straight away. But they were left with only  human life, bios life. They couldn't live forever and ever in eternity with God anymore.

John 1:4
In him was life, and that life was the light of all mankind.

The word for 'life' used here is 'zoe'. This verse is talking about Jesus. Jesus had both lives - bios, having an earthly body, and zoe, being God's Son.

So how do we get that second life?

When we place our faith in the living God, He comes and lives inside of us.

Colossians 17
To them God has chosen to make known among the Gentiles the glorious riches of this mystery, which is Christ in you, the hope of glory.

When Christ comes and lives inside of us, we have our bios life, which stops when our life on this earth is over. But because we have the eternal life found in our Saviour, it's not all over.

In fact, it's just the beginning.

*All Scripture quotations are from the NIV version unless otherwise indicated.

**There is a third Greek word that refers to life, 'psuche', which talks about your emotional and psychological life, but it's a bit of a roundabout one and doesn't really have any bearing on what we're discussing.
Written just for you by Bonnie Sampson on 6/10/2015 07:26:00 am