My goodness, I haven't done an awkward and awesome post for yonks! Must be time for another one, don't you think?

Awkward:
- Spraining your ankle on the second day of camp and hopping/hobbling around for the rest of the week.
- Being introduced to new people by someone else and having the someone else stand there and elaborate on your virtues for ages..... SO awkward....
- Beginning to tell a joke and remembering halfway through that you don't remember the punch line. Thankfully someone else knew the joke already and thoughtfully provided the punch line.
- The joys of travelling with lots of little ones... having your seat kicked repeatedly for five hours straight by the child behind you, being deafened by the baby beside you, and being covered in little bits of apple by the aforementioned baby beside you who delights in chewing bits of apple and spitting the mouthful all over you. :) Ah, travelling.
- Filming a video and disliking your attempts ten times. The eleventh time the video was sort of slightly more acceptable than the last few had been!
- Starting the same sentence three times, and someone talking over you every time.
- Having a silly conversation with someone and digging yourself into a hole. Awkward much.
- The fact that Jana has broken the family record (which I, in my babyhood, previously held) for the most disgusting thing a baby in this family has done. I won't go into the details, but Jana's escapade involved the toilet that one of the younger ones had neglected to flush. It also involved a lot of disinfectant after it was discovered. Don't ask what Jana did. Or what I did. Trust me. You don't want to know.
- Struggling for ages to make a programme. Spreadsheets, what fun. My Excel skills are extremely limited.

Awesome:
- Spending time with old friends and meeting wonderful new ones.
- Coming home from conference to a warm house and a lovely tea cooked by the wonderful members of your family who didn't go the conference. A nice meal after a long trip is delightful.
- Watching funny/silly youtube videos. Like this one.
- Getting hold of an absolutely incredible book (that you've been wanting to read for ages), and purposefully reading it as slowly as you can because you're enjoying it so much you want to prolong the pleasure. I almost never do that.
- After what I told you about Jana in the second to last point in the 'Awkward' section, here's a cute photo of her that I found hidden in the depths of a computer folder recently. It was taken in February this year, when little Miss Jana turned one. 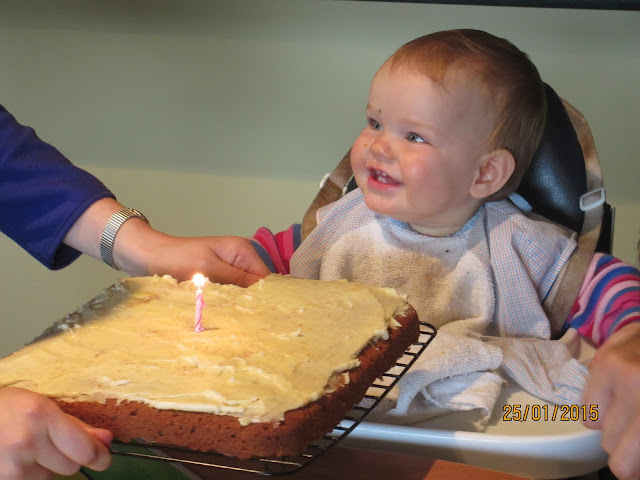 - Seeing daffodil shoots coming up out of the ground. It's little things like that that cheer me up and remind me that winter won't last forever.
- Winter is nice, though. Getting to wear nice thick jerseys and wooly socks... the simple pleasures of life! And snuggling into bed at the end of the day and pulling up lots of blankets over you and being nice and toasty and warm... I love being warm.
- Hugging people who give good hugs. There are definitely people out there who give better hugs than others. I should write a post someday on how to give a good hug. I'm, like, a self professed hug connoisseur.
- The fact that I am nearly at five hundred posts! I have something slightly awesome lined up for then... prepare to be excited... and.... wait for it.......okay, you're officially allowed to be excited now!

And with that news I shall leave you.

Are you a self professed hug connoisseur? (Extra marks if someone else thinks you are, too.)
What's your favourite thing about winter?
Ever sprained an ankle?