Whether you are a photographer or not you may have heard the terms "overexposed" and "underexposed". I'm sure you know that overexposed refers to when a picture is too white and has "blown the highlights" and there is no detail in those areas. Underexposed would be a photo that is very dark and has little or no detail in some areas.

Today I shall try and explain what is happening behind these words and hopefully give you a better understanding of how exposure is created and get you on your way to understanding the manual settings a little bit better.

The exposure is created from three things: shutter speed, aperture and ISO. This is sometimes called the exposure triangle.

The speed is displayed as fractions of a second, example 1/250.  A fast shutter speed can freeze motion such as a sprinter whereas you can use a slower shutter speed to get a sense of motion or to take in low light situations. The bigger the number in the denominator (the bottom number for those who aren't keen on maths :P ) the faster the speed will be as the fraction is smaller. You can also go to the other end of the scale where the shutter can be open for a few seconds at a time or even be controlled by the shutter button so that you can control it manually.

One problem that you have to watch out for with long shutter times is camera shake. You can never stand completely still and with the shutter being open for a long time, slight movements are very noticeable. Some cameras and lenses have built in stabilizers to reduce this and you can also use a bracing technique to further prevent this. A guideline to avoid camera shake would be, for example, if you are using a 50mm lens to use a shutter speed of 1/50 or faster. If you are using a 250mm lens use a shutter speed of 1/250 or faster. This is for when you are holding the camera. On the other hand you can simply use a tripod or if you don't have one handy use a wall or other solid object to rest your camera on. This will let you try out slower shutter speeds.

Being able to have long shutter speeds allows you to experiment with things such as light painting.

In shutter priority or manual modes you can set the shutter speed yourself. In shutter priority your camera will work out the rest of the settings in accordance to the speed you have set. If you're not quite ready to go to manual but want to experiment with the more advanced settings, it is nice to use one of the priority settings so that you can try changing one setting at a time.

I found this the hardest concept to grasp, but now that I think I have got my mind around it, I am keen to share my new found knowledge!

The aperture refers to the opening through which the light enters. The opening is made up of a number of blades that move to adjust the opening to different sizes. Since the aperture also affects the exposure you'll see that by changing shutter speed or aperture you'll affect the other.

Aperture is measured in f-stops. You can go up or down a stop to halve or double the size of the opening and therefore the amount of light. The confusing part is that the bigger the number, the smaller the aperture and the smaller the number, the bigger the aperture. For example, an aperture of f/5.6 has a bigger opening than one of f/22. To help me remember this I picture the size of the closed blades; the more amount they are covering the larger the number.

F-stops don't go in integer increments but instead look something like: 2.8, 4, 5.6, 8, 11, 16... This baffled me but I've recently found an interesting article that explains why they are that way. F-stops are calculated by dividing the focal length by the aperture diameter (If you would like to read the article you can find it here. It's very interesting and shows the maths behind it). As for the pattern between the sequence of numbers, you simply multiply a number by two to get the number two places along or multiply each number by the square root of 2 to get to the next number.

F-stops also indicate your depth of field (how much of your picture is in focus). The trick to remembering this is easier: big number, big depth of field, small number, small depth of field.

Now to see how these effect the exposure together. For the aperture if you go up one stop you halve the amount of light and if you go down one stop you double it. The same for shutter speed. Now let's say for example that you are happy with your exposure but want to change your depth of field. You can get the same exposure by changing the shutter speed and aperture in relation to one another (however much you change one, you must change the other in the opposite way). In this way you can get a range of different combinations for the same exposure.

The last thing to consider is ISO. This is the film or sensor's sensitivity to light. On a sunny day 100 would be right but it can be set to 1600 or higher. This can be helpful in low-light situations. The sensor or film will show more at a lower ISO speed. The problem is that with such a high sensitivity you can get grain or noise, which doesn't usually look great unless that is what you are trying to achieve.

You can now see why this is often referred to as "the exposure triangle" or "the three pillars of photography" as they all affect the overall exposure and by changing one, you may need to alter the others to compensate for it.


I hope that you found this interesting and have learnt something new. :) 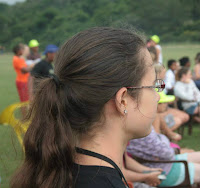 Hi, I'm Shendl, a South African that has a dislike of seafood, an affinity for interesting words and a yearning for adventures.