A + A // Ski Crash Spectacular

Awkward:
- Trying to pour soup from a thermos into a cup in a moving vehicle and not realizing there's a sharp bend up ahead... No, I didn't spill it, but I came awfully close!
- So I went skiing recently (I've been a few times before and am an intermediate skier), and I had just done a run off the summit of the mountain. As I was dropping down into a lower run, I witnessed a spectacular crash across the slope. Someone went flying and one of their skis ended up quite a bit higher on the mountain than they did. So I thought to myself, I am going to be a Good Samaritan (because there wasn't really anyone else very near). So I skied across the slope, picked up his ski and started skiing down to him to deliver his ski to him and see if he needed help. However, as I came down to him I completely lost control and crashed myself! (I think it was mostly due to the fact that I was trying to hold onto his ski as well as my poles and ski myself... and it was a particularly steep bit of the slope...) Anyway, I ended up in a pile at his feet and both he and I were laughing uncontrollably. Here was I, trying to help him out, and I crash myself!! His ski that I had been holding flew out of my arms when I crashed and landed a wee way down the mountain. My skis came off and I spent about ten minutes trying to get them back on again. As I said before, the slope was really steep and whenever I tried to stand on the ski hard to get the bindings on my boot to snap onto the ski, my other ski would start to slide and over I would go again. It took me ages to get back together again. But I eventually managed it, when the kind gentleman who I'd originally set out to help helped me get myself sorted out. Oh dear. We sorted it out in the end. So funny though. And sort of ironic, when you think about it. (That was the first of only two times I crashed that day, just saying!)
- Asking a question, and then thinking about something else. The other person answers your question but you're so busy thinking about this other thing you completely miss what they said and have to ask again.
- Trying to play the violin while wearing a thick scarf. The two do not go together, which is slightly annoying.


Awesome:
- Being able to 'talk' to your sister by only using your facial expressions. And her totally understanding what you're asking and replying with her eyes. Such a cool thing! It mystified the people around us. They were like, "How did you guys do that?" And we were like, "We knew what the other one was thinking and asking."
- Having a nice big pun battle. Such fun. Haven't had one of those for ages.
- Knitting an entire soft toy in a week. (He's the mascot for a superhero themed kid's camp coming up soon.) I named him Steve. Here he is, waving hi to you all. :) 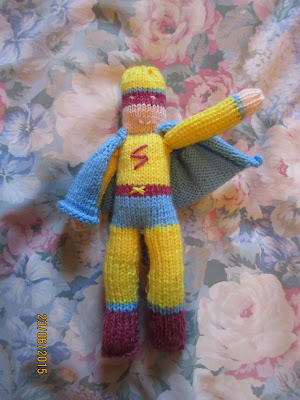 - Falling asleep in your warm, cosy bed, listening to the sound of gentle rain on the roof.
- Banana splits for dessert, with ripe bananas, cookies and cream icecream and homemade chocolate sauce.
- The book of Isaiah. I love the prophetic books in the Bible. So much wonderfulness in them.


Isaiah 43:1-3
But now, this is what the Lord says— he who created you, Jacob, he who formed you, Israel:
“Do not fear, for I have redeemed you; I have summoned you by name; you are mine.
When you pass through the waters,I will be with you; and when you pass through the rivers, they will not sweep over you. When you walk through the fire, you will not be burned; the flames will not set you ablaze.
For I am the Lord your God, the Holy One of Israel, your Savior...

And that seems like a good note on which to close. :)

Have you ever been skiing and crashed spectacularly?
Do you knit? If so, what sort of projects do you make?
What's your favourite book of the Bible?