What I Learned From Lunch-making 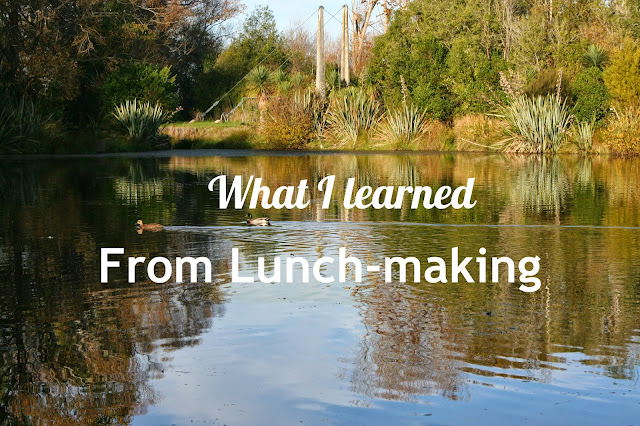 (I would use a photo of a lunch here, but I'm too lazy to go through the rigmarole of taking a photo and waiting yonks for it to upload onto the computer... so you'll have to be content with a generic scenery shot sorry! lol)

It started back many years ago, when I was a lot younger. I don't remember what age exactly. Somewhere in the vicinity of nine or so, I should imagine.

I was tasked with the job of making Daddy's lunch every morning so he could take it with him to work.

Here's a confession: I was not the most cheerful worker. Making Daddy's lunch wasn't my only chore, but for some reason it became my least favourite. It became the bane of my life.

I'm not even sure completely why that was. Maybe it was because it was neccessary to do it at an inconvenient hour of the morning. Maybe because I always had to make Daddy the same thing every day (banana sandwiches, for those who are curious!) and I got sick of it.

Right up until the end of last year.

When Daddy lost his job.

And I didn't have to make his lunch anymore.

Do you want to know something? You know how I'd been wising for years that I didn't have to make his lunch? Well, I started wishing wholeheartedly that I would be able to again. Because that would mean that Dad would have a job.

He does have a job now, it's not as good a job as the one he had before he got made redundant. But that's beside the point. He has a job now, and I have the honour and privilege of making his lunch for him every morning.

Perspective is everything, isn't it!

You know what? Thankfulness is the key to joy.

Being thankful about something will make you cheerful and joyful. My chore of making Daddy's lunch became a joyful task because I realised how thankful I was that he had a job so I could make him lunch to take to it.

What do you dislike doing?

That's what I discovered, anyway. :)