A + A // Dropping the meatballs + I forgot the punch line

Awkward:
- Having someone burst into the room and going, "We can't find the dog and the gate's wide open!" There's a universal groan as we all remember the many times our previous dog (we looked after him long term for someone else a few years ago. He was half beagle, half lhasa apso) escaped. Thankfully, after looking up and down the street for Baxter, he was found pretty soon.
- Starting to tell a joke and realizing half way through that you've forgotten the punch line.
- Doing the President's Welcome at your public speaking group and saying the silliest stuff because your mind just fogs and you don't have a clue what you're saying... not a good start to an evening of competition.
- That awkward moment when you realize you've been pronouncing a word wrong your entire life.
- Jana now being able to open and close doors all by herself. No bedroom is safe.
- Accidentally dropping an entire container full of meatballs at work. The lid flew off and meatball sauce went everywhere. I was completely splattered in it. It looked like someone had been killed! (the sauce is a bright red tomato-y colour). Thankfully, the container landed right side up so all the meatballs stayed inside. I would have been in trouble if it had landed upside down!!
- Deciding to be super awesome, so you throw your apple core into the colander from half way across the kitchen. And it doesn't land in the colander.
- Interjecting into a conversation a Bible verse that fit the situation beautifully, then realizing later on that day that you had the wrong reference. (Not that anyone would have looked it up or anything, but still..)
- Having a coughing fit in public and not being able to stop coughing.


Awesome:
- When people trust your judgement enough to ask you for advice (I know, I couldn't believe it either... :P)
- This song... love the chorus especially!


- Getting the giggles really bad one night when you're lying in bed because you remember something terribly funny that happened that day. You're lying there, replaying the scene in your mind heaps of times, giggling uncontrollably. 'Twas such fun.
- Fejoias. Those little fruits are incredible.
- The fact that not all silences are awkward. I've decided that not only is there such a thing as an awkward silence, but there's such a thing as a companionable silence. Would you agree?
- When you wonderful readers leave comments. Hint, hint. :P
- This adorable photo of Lydia with a seal during a day trip to Kaikoura our family did recently. 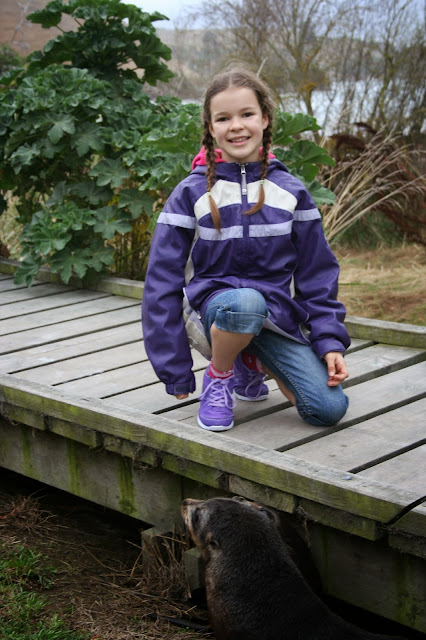 - Getting lots of good practice trusting in the Lord. :)
- The fact that sometimes there's nothing nicer than putting on a pair of gumboots and a jacket and going for a nice, long, brisk walk in the rain.
- Writing a poem again after going for quite a while without writing any. I love writing poems.
- On the subject of writing... Practicing writing with your left hand (I'm right handed) and it actually looking not too terrible. Progress!
- Smiley people in one's life. It's wonderful to have positive friends. :)

Do you go for walks in the rain?
Do you think there's such a thing as a companionable silence or are all silences awkward?
Are you a writer of poems?