A + A // life is more awesome than awkward

Awkward:
- Borrowing my sister's white singlet to wear to church. It was Father's Day, so to celebrate, the church had kebabs and sausages afterwards. I was standing beside my younger sister while she prepared to pour tomato sauce onto her sausage (which was a TERRIBLE idea)... she aimed it the wrong way and splattered bright red tomato sauce all the way down my front, which stained the borrowed white singlet.
- Talking on the phone and interrupting each other a few times so both of you remain silent... listening to the awkwardness... until both of you interrupt each other again to say, "No, you go!"
- Spending ages puzzling over an answer in a past exam paper (used for practice/study purposes) only to discover you had read the question wrong.
- Milking the cow (under shelter, fortunately!) in the middle of a big storm and watching the tunnel house roof rip in two because of the terrible winds (see photo below). 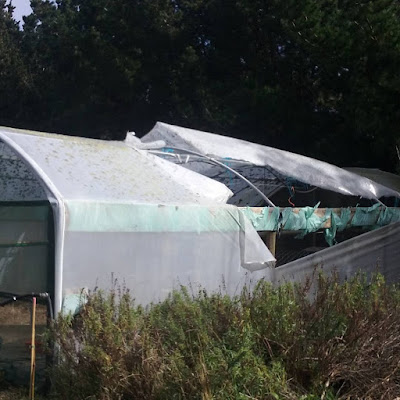 - Accidentally bumping the windshield wiper switch while driving and having the wipers merrily wipe your dry windscreen while you fumble to try and turn them off.
- Taking a friend out to see our dugout and holding the hatch open for them. Then when they have climbed down into it, accidentally letting go of the hatch and dropping it... on their head :/ It was really heavy and I felt terrible. Friend-who-is-maybe-reading-this, I'm so sorry.
- Lydia: "Aidyl. Aidyl. It's my name backwards."
Caleb: "Some people actually name their children Aidyl."
Me, overhearing their conversation: "???!!?!?"
- Hitting the wrong button in the lift and having the lift stop at the wrong floor for no reason.
- Taking a stack of dirty dishes to the sink at work when someone is just finishing doing all the dishes and they say they don't mind but they give you a death stare. :/

Awesome:
- Cute wee babies!! Michael is so adorable and such a blessing to our family. Here are a few photos of him awake (as requested by some of my readers :P).

- Lying in bed in that delicious state where your bed has reached the perfect warmth and you're feeling really drowsy and about to drop off to sleep when the rain starts on the roof. Such a comforting sound and makes your bed ever so much cosier.
- Making a CV. So exciting.
- Watching Johnny learn how to solve a Rubik's cube.
- Having a boring evening until your friend starts dredging up all your old emails to them from like 2011 and starts sending them to you with hilarious comments and you end up rolling around on the floor laughing so hard and showing choice snippets to your sister. Completely made my entire evening. It was amazing.
- Looking forward to all the exciting things coming up. Friends getting married, a formal (ball), exams (most exciting of all :P), my trip to the States coming ever closer... life is very exciting right now! :)
- Awesome jokes. Guys, do you want to hear some jokes and funny one liners??? Well I want to tell some so you're stuck. :P Here we go, ready or not!

I bought my friend an elephant for his room.  He said, "Thanks." I said, "Don't mention it."

I used to be addicted to the hokey pokey, but then I turned myself around.

(You're welcome :P)
- Having awesome conversations with strangers about God.
- Me to Sophie: "What's awesome, Sophie?" Sophie: "You". Sophie, you're awesome for saying that, and you made into an awkward and awesome post so well done :P
- Playing a board game with Grandma and my siblings and winning. Such a good feeling. Anyone want to play Trans Europa?
- Mending my formal (ball) dress. I wore it last year and managed to rip the hem a little so I have finally gotten around to mending it so I can wear it again this year. Who says homeschoolers can't go to formals? :) And isn't that feeling when you finally get round to mending something SO GOOD?
- I know I say this every spring but spring is always awesome! I love seeing spring spring-ing. Blossoms... daffodils... baby animals... ahhhhh spring is amazing. Yay for warmer weather! #ilikespringratheralot

What is your favourite board game?
Have you ever been splattered with tomato sauce? Story time!
Have you ever injured someone by dropping something on their head? Do share.