I've finally broken the bad habit that has been the bane of my entire existence.
I have stopped biting my fingernails.

Perhaps not permanently, mind you. I mean, if no scissors are handy and there's an annoying bit coming off then I might just bite it off. But I've got to the point where I'm not obsessive about biting them right down. And I'm so thankful of that! It's the resolution I make every year - to stop biting my nails - and have always, so far, failed.

I've tried countless times before. Clear nail polish, sticking plasters over the nails, sheer willpower, you name it. But something about the summer of 2016 was just right for breaking this habit and so I set out on my mission (not completely sure this try was going to be any different than the others!).

I painted my nails with clear nail polish (it wasn't coloured because I hate drawing attention to my short, stubby, bitten fingernails). I then re-applied it religiously when it threatened to chip off. And so my battle began.

Slowly, sure. But they grew.
After a few weeks they got to the point where it felt different to play the violin because the nails on my left hand fingers were now long enough to interfere with my vibrato technique.

So I don't think I can let them grow much more.

But I've got to the point where I no longer bite my nails while reading a book. I can bring my fingers up to my face and take them away again. The urge is no longer there.

I think it's safe to say I've beaten the habit.

If you're like me, you find it EXTREMELY hard to overcome a bad habit. I've been trying to stop biting my nails for years. Ever since I can remember, in fact.

I've heard it takes three days to form a habit and three weeks to get rid of one.

So how do you break a bad habit? How did I do it?

I'm not an expert. All I've done is broken one habit that's plagued my existence. (Actually, two- when I was about eight I stopped sucking my thumb. Maybe I am an expert. :P)
But I'm sure we've all got bad habits that could do with a bit of breaking, so if you are interested, read on for my (hopefully) helpful guide to overcoming a bad habit, drawn out of my experiences.


1. Make sure breaking the habit is something you REALLY want to do.
Bad habits hold you in a vice like grip. So much so that you have to be pretty persistent to break free. You've got to really want to. If you're lukewarm or don't see the point of breaking it, don't even bother.

2. Set standards in place that will help you in your habit-breaking journey.
Tell some people about your goals. They can encourage you and hold you up to what you've started out to do. Try different methods for breaking your habit. Things like not just trying to remember to keep your fingers out of your mouth, but putting nail polish on so the nails taste awful. Do things. The more boundaries and standards you have in place before you begin, the easier you will find it.

3. Actually START.
There is no point in spending all day planning the habit breaking. There's nothing quite like actually starting. There's no day like today, no time like right now!

4. Reward the little triumphs.
Appreciate when you've come somewhere. Maybe you're two days into your challenge. Maybe you're two hours into it. Give yourself chocolate and celebrate your accomplishment. Motivation can be easily lost, especially when the going's hard, so keep at it and recognise some milestones.

5. Be strict on yourself.
Don't say to yourself, "Oh, I'll just ---- once". No, you will not bite your nails once, you will not give in to your temptation once. You were doing so well! Keep it up. Once you succumb once, the complete give in is just around the corner. Be a bit strict on yourself and realise that it's the only way you're going to break this habit. If it works for you, use punishments. Donate money when you slip up. Do fifty press-ups. Whatever works.

6. Follow it through! Don't lose motivation!
The most dangerous time for giving into temptation for me was about a week into it. My nails were annoyingly long, I was close to giving in. But remember why you're doing it. (Go back to your reasons in step 1.) Celebrate how far you've come and DON'T GIVE UP!! :) You can do it!

7. Recognise a victory and celebrate it.
Okay, it's four weeks after you've made your commitment and you're finding it a bit easier now. If you reckon you've actually broken this habit, maybe you have! Celebrate it and be happy! You did it. Don't keep trying ridiculously hard for another year. Maybe you're just as far from biting your nails now as you will be in three years time! 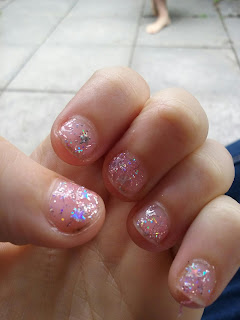 Look what this is - me wearing coloured nail polish for the first time in my entire life! For some reason it was really exciting. My nails have always been so short I never liked polishing them and so drawing attention to them. Pink sparkly nail polish to celebrate was definitely a good choice.


Hope you found that helpful! :) Have you ever broken a major bad habit?

Email ThisBlogThis!Share to TwitterShare to FacebookShare to Pinterest
Labels: bad habits, being an overcomer, biting your fingernails