Awkward:
- Deciding randomly that it would be fun to try and recite a poem that you memorised years ago. So you start off quite happily, putting gestures and lots of vocal variety into it, until you are about half way through. Then that awful moment when it's like: What. Comes. Next?
- Needing to post a letter on the way to something. "Oh, there's a post office! They always have a post box somewhere near them!" Then going over there and standing in the doorway of the shop looking lost. "Where on earth is that post box? It should be somewhere round here!" Then having a nice elderly gentlemen notice my lost look and the letter in my hand, take me firmly by the arm, point me in the right direction and say "The box is over there, lovey."
- Wanting to throw an apple core into the sink in a spectacular way from a long distance. And trying, and missing completely. Fail.
- In someone else's vehicle in the backseat. Addressing a question to the person in the passenger seat, only to have them loudly say something completely random and off topic. Then realising they were in the middle of a cellphone conversation and you didn't know.
- Answering the phone in the evening: "Good morning, you're speaking with Bonnie!"
- At the AGM of your public speaking group when they are asking for nominations for people who want to be President and lead the committee for 2015. There's a long silence and suddenly everyone looks at you and wants to know why you aren't putting your name down...long story short after lots of persuasion and arm-twisting and people voting for me, I'm now President for 2015. Yay! *pulls hair out* I have no idea if this is a good idea.
- Laughing out loud at something you read in a book and everyone within hearing distance looks at you.
- Another phone one. Answering the phone then hearing absolutely nothing on the other end of the line. So you try again. "Hello? *pause* Is anyone there? *pause* Hello?" Then eventually (after about ten years) the other person hangs up.
- When you have one of those scatterbrained days when you can't find anything that you're looking for.


Awesome:
- A letter arriving that I certainly wasn't expecting and was a lovely surprise.
- Seeing photos of little babies. Or better still, seeing them in person.
- Strawberries from the garden!
- That I am, right at this moment, on holiday. That fact is very awesome.
- God's faithfulness
- Finding ways to make your room Christmassy. (Shown below is a shelf in Danella and Sophie's room.) 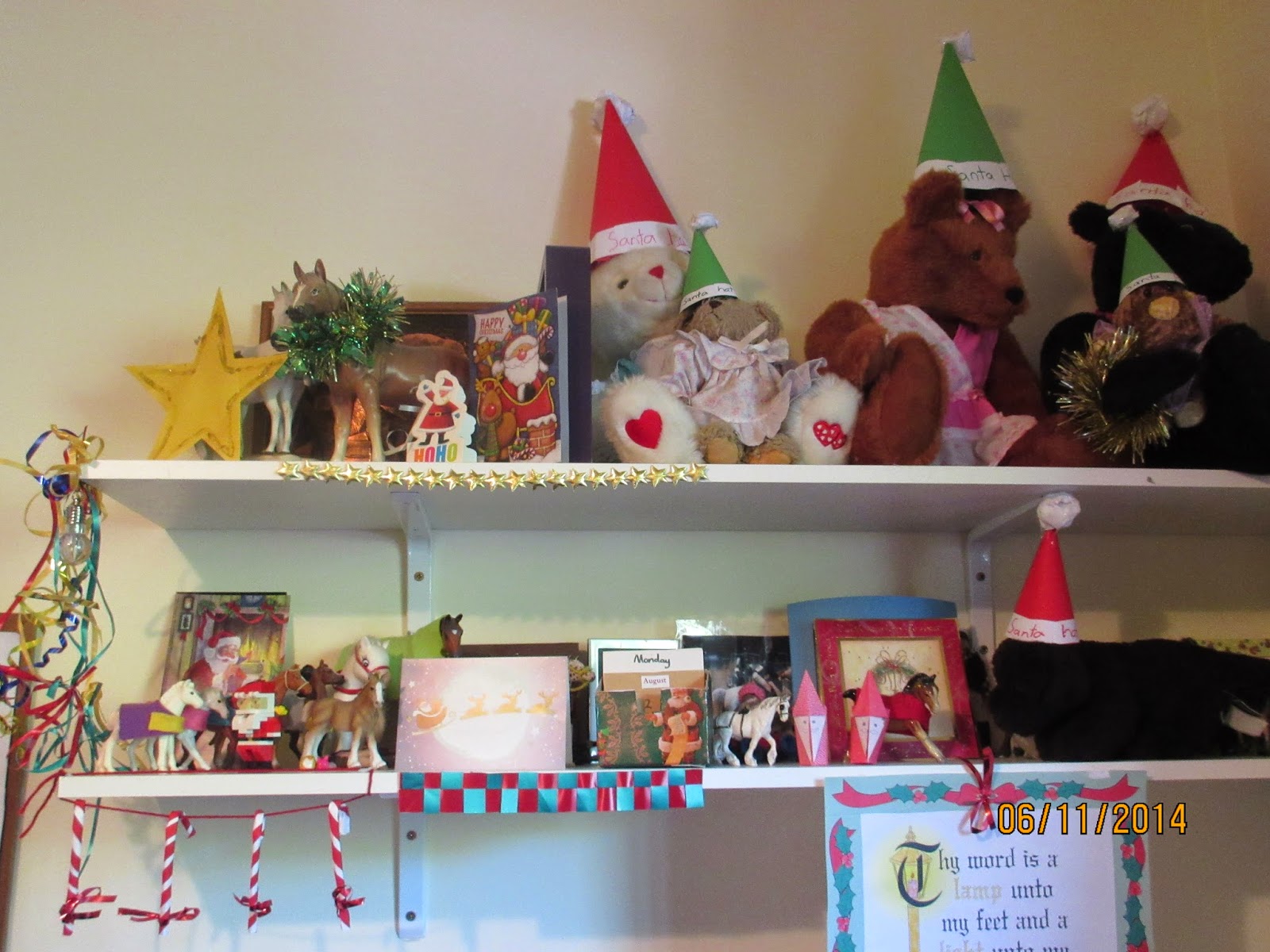 - Singing in a choir at Church on Sunday morning. It sounds awesome when everyone is all harmonising together and singing the right thing! ;)
- The Bible on audio. We put it on our ipods so we can listen to the Bible whenever we go on long trips or whatever! It's a great way to hear God's Word and pass the time. Two birds with one stone. What could be better?
- Jacob playing with his truck (I just thought it was a cool photo :) ) - Stuffed pancakes
- Playing this awesome game called 'Body, body' with a whole lot of people who had never played it before after you suggested it. :) Then having them absolutely love it and want to play again.
- Water fights on a hot day.


What has been awkward or awesome about your week?