Sticking Together So We Can Stop Traffic 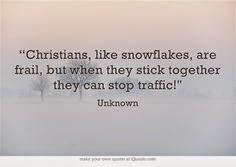 Go back and read that quote again. I know you just skimmed through it. ;)

You read it again? Great. Good job. Now read it a third time, but this time actually think about what it could possibly mean.

But seriously, it's an interesting thought isn't it? Let's analyse that quote. Let's dig a little deeper and see if we can really understand what it is trying to say.

Christians, like snowflakes, are frail. Well to me this first bit is a little like, "duh, seriously?" I mean, we are frail. The Bible says in Psalm 103 vs 13-16 (emphasis added):

As a father has compassion on his children,
so the Lord has compassion on those who fear him;
for he knows how we are formed,
he remembers that we are dust.
The life of mortals is like grass,
they flourish like a flower of the field;
the wind blows over it and it is gone,
and its place remembers it no more.

So okay, we get that we are frail. Cool. Great. Awesome. Movin' right along.

.....but when they stick together, they can stop traffic. Yay! This is really gettin' into the interesting stuff, now, folks! Who knew that something as massively awesome as being able to stop traffic comes from sticking together with other like-minded believers?

I know some of you may interpret this quote as to it's first apparent meaning (stick to other Christians), hence the long "go back and take another look at it" bit at the start. Aha, you think. Now I get it. Yes, you do! Good for you. ;)

I see this whole quote as a call to prayer. Actually, here is that sentence again in bigger font because it's so important.

I see this whole quote as a call to prayer.

So some of you people may know that I am a leader at holiday kids camps called Good News camps, so basically we get all these random local kids out to camp for a week, give them a blast at all sorts of awesome activities but also explain the gospel to them and that sort of stuff. Anyway, as a leader, I am required by the leadership to have three prayer partners who pray for me while I am away at camp.

I always try and get more than three prayer partners because well, who can get too much prayer?! :) But anyway, this one camp I was really busy beforehand and I got my three prayer partners and they did a fantastic job praying hard out for me during camp. Which was totally awesome and everything. But you know what? I really felt like that was a really hard camp. I found it exhausting both physically and emotionally. I know I had people praying, but I felt like I could really have done with more pray-ers! That was the hardest camp I've ever done and I feel like it was because I had less prayer coverage than usual. There are probably other factors too, but that is the main one I think.

It is amazing how effective prayer is.
Whenever I get into a bit of a sticky situation my first response is to find someone who can pray for me / with me until the stickyness of the situation is cleared up.

So anyway, back to the quote. If we stick together we are way more effective and powerful than each of us going our own individual little ways. Well how about we pray for each other? Prayer is a massive weapon against the enemy.

"The greatest thing anyone can do for God or man is pray." S.D. Gordon

"Don’t pray when you feel like it. Have an appointment with the Lord and keep it. A man is powerful on his knees." Corrie ten Boom

So, who to pray for?
Here are just a few ideas of people and things to pray for. The list goes on and on! I'm sure you can think of many others to add to the list.

What I often do is pray that the Lord will lay someone on my heart that needs prayer that particular day then just pray hard out for that person all day long! They never know I prayed for them, but I'm sure a battle is being fought in the heavenly realm.

Join with me in prayer - oh, and snowflakes, let's see how much traffic we can stop!

PS. Not wanting to distract from the point of this post, but just saying, this is the 400th post on my blog!