Once upon a time, there was a little girl who lived in a house in town with her parents and her brothers, Gottfried and George. The little girl’s name was Grace, and her favourite things to do in all the world were to dance, and to read.

One day in spring, the whole family went to the A&P Show together.

The first thing they did was to go into the Produce Shed and see if they or their friends had won any prizes for their baking and crafts. Mummy had won first prize for her wine. Grace hadn’t won a prize, but attached to her collage was a voucher for the video shop!

After they had been all around the shed, it was time for the Grand Parade. All the prize-winning animals marched slowly around the show ring, with one pipe band at each end for accompaniment. Grace was frightened when one of the huge Clydesdale horses was clumping straight towards her, but it turned away just in time.

When the parade was over, the family went down to where all the stalls and tents were. Gottfried and George stopped to climb on the tractors. While Grace and her parents waited for them, Grace peeped over her shoulder at the dolls’ house display until the stall-holder smiled at her, and she turned quickly round again. Then they went on to the rides.

Gottfried immediately shouted that he would like to have a turn on the mini jeeps. While Daddy paid for his ticket, Mummy invited George to ride on the merry-go-round. Then Daddy and Grace kept strolling along, peering at all the rides to see if there was one Grace would like. All of a sudden, Daddy stopped.

“Look, Grace! Here is a ghost train. I always went on it with my friends when I was a boy. Why don’t you try it?”

Grace wasn’t sure, but just then Mummy and the boys came along and encouraged her to go on the ride. So Daddy and Grace went up to the ticket man.

“Right,” he said, “that’s five dollars, thanks. Now young lady, you just keep your hands and head inside the car and don’t wave them about. Take your hat off now if you don’t want to wear it.”

Daddy helped Grace into the little car. She sat quite straight, with her hands in her lap. The ticket man started the engine and pushed her off into the dark tunnel, calling

The train wasn’t very fast. Grace sat still and gazed at everything around as she went past. There were cobwebs, and spiders, and rats, and red lights, and there was black cloth draped on all the walls. She was just trying to figure out how the white rat was making its glinting eyes flicker on and off when the black drapery to her right moved aside, and out stepped a shadowy figure.

“Why, hello,” said Grace softly, for she thought it was the ticket man, come to help the fading rat.

Grace looked at it serenely as the car steadily turned a corner. Anybody knew that skeletons didn’t just walk out from behind curtains. The car turned another bend and came out into the dull November light.

Grace looked impassively at each one and said,

“Really, it was rather dull…” 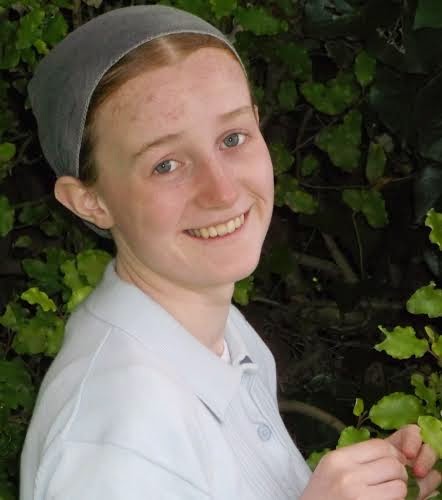 About the Author // Hi! I’m Rhoda, and I live in the beautiful South Island with my parents and four younger brothers. I was baptised into the Reformed Church of Oamaru as an infant. Later, God worked in my heart so that now I love Him! I joined the church as a communicant member in November 2012.

I blog at servingwithjoy.wordpress.com, with the aim of encouraging young women to serve God whole-heartedly, never forgetting the joy of life in Christ.