Awkward:
- Lying in bed just thinking of all the things you've forgotten to write down that you've got to do the next day... so up you get, write them down, and go back to bed. To sleep. But no, you keep thinking of more things. So you get up (at least four times) to write them down. Moving house creates sleepless nights, a fuzzy brain and lots of work to be done.
- When your family discovers something you wrote in 2009 (it's rather embarrassing actually) and are like, "Oh, this is great! We're going to save this for your 21st!" and proceed to photocopy it so it doesn't get lost and you're just like.... well... 21st, stay in the far distant future please, and thank you.
- Someone seeing you and being like, "Oh you actually look really nice today!" leaving you wondering if that means you don't normally look nice. :/ It's the addition of that 'actually'. Makes you question rather a lot.
- Getting a REALLY BAD fit of the giggles at the dinner table where you literally cannot stop laughing. And your family just all start laughing at you. Because you're so hilarious. And eventually the comments start rolling in when your siblings start describing (in between giggles) exactly what you look like when you're unable to stop laughing. "Your face looks flat." "You look like a Chinese person." "No, you look like a sunburnt Chinese person". (Me asking after I've managed to stop laughing eventually: "Why a sunburnt Chinese person?" Them: "Because your face is so red." Right......)
- When one of your younger younger brothers (the younger younger brothers as opposed to the younger brothers - that means Caleb and Jacob instead of Ben and Johnny) - packages up a box to be moved when we move house. He tapes it up and everything and then writes on the top, "Very heavy!" I picked up the box to see how heavy it was and it is not heavy at all. I could hold it using about two fingers. It was hilarious considering the weight of some of those book boxes I packed and didn't write 'heavy' on the top of!
- Dropping an entire Cambro (approx 5 litre container we put meat and vegetables into) full of sliced onion while at work. Seriously. I was also carrying a Cambro of bacon and two bags of lettuce so I'm glad those didn't fall, but honestly, people, dropping an entire Cambro of food is the sort of horror story we tell new employees! Such a waste of the onion and it completely ruins your day. My boss wasn't too thrilled with me. As you can probably imagine.


Awesome:
- Kind friends who help us move house. And more kind friends who babysit the younger children so us older ones and Mum can pack up.
- Weddings!!! Two friends marrying each other is just so exciting.
- Heaps and heaps of nice ripe blackboy peaches. 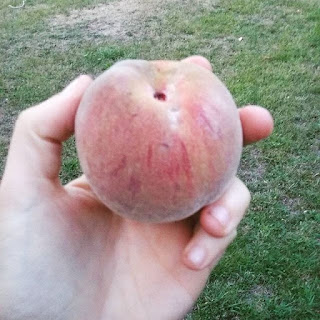 - Finishing a Progress Review for my course really early
- Getting to hold a really really really tiny baby who is just super adorable... I can't wait for our own little tiny super adorable baby to make his or her appearance at the end of August!
- Being invited to be a counselor at a Bible camp (Jumpstart, for those who are familiar with it) in Nelson. The campers are aged up to 18 and I won't have even turned 18 before the camp! I mentioned this to the man organizing it when he rang me asking me if I would like to be a counselor.... and I was so encouraged and thrilled when he said that he thinks I'm really spiritually mature or else he wouldn't have asked me! Totally made my day.
- Paying for something with the exact right change. It's just so exciting.
- My lovely sister's photography. I haven't had photos of me playing my violin really before (Grandma took one once but I was actually wearing my pyjamas in the photo, believe it or not, and I've never liked it at all! Obviously it's not terrible because Grandma hung it on the wall in their kitchen... but still, pyjamas?!) so I was thrilled with how they turned out. Thanks, Danella.


- Unearthing all kinds of interesting things in the process of packing up and moving. Not a day (or hour) goes past without Mum (or any of us, really) going, "Come and look at this, everyone!"
- Saying the same thing as someone else at the same time. It just makes you feel quite (oh, I don't know), special? That your mind runs along the same track as another's at times.
- Picking up a Q in Scrabble when you already have a U
- Being invited to a friend's birthday where you have to dress up as someone from Ancient Rome. And thinking, what on earth am I going to wear. And after a little foray into some wardrobes and a little advice from helpful siblings coming up with something relatively painlessly and quickly! Such a good feeling.
- Taking your shoes off.

Do you ever get the giggles?
Does your family save all the embarassing stories from your life to share at your 21st?
What is your favourite fruit?