My Daily Journaling Journey and a brief attempt at being motivational 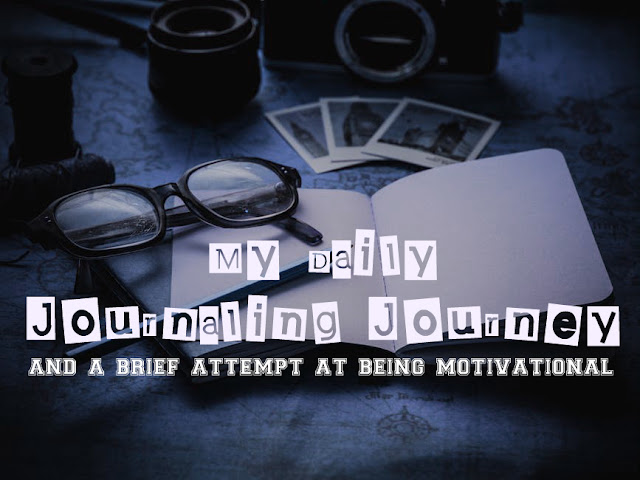 At the beginning of this year I made myself a bit of a resolution. I wanted to write in my journal every single day of this year.

I did better than I thought I would, to be honest. I was expecting it to fizzle out at some point. And I managed it! For about two months. I missed one day in mid January, I missed one day at the end of January (this one has a legit excuse - I was flying back from America and I didn't actually get an entire day because of time zones and stuff so I skipped it because that day didn't exist in my life :P) and I can't remember about February. I think I might have missed one or two.

And I forgot two days in a row. :/ I remembered the third day but decided not to because I was doing other things and honestly couldn't be bothered.

It was going quite well until that point!

I've given up on the 'daily journaling' idea. Cos it's too hard to actually do every. single. day.

But it got me thinking. What is in me that allows me to just give up like this? Why do I, as soon as I fail often enough, refuse to get back up, pick up the pen on a new day and continue?

I don't even know all the answers to that question.

But I think they would be along the lines of "as soon as it becomes difficult" and "as soon as I view it as less important".

Because if you have something you desire to do, you have to DO IT.

(that was real inspirational material right there, guys!)

And DOING IT takes time. And effort. And making it a priority.

Hmm, yeah, making it a priority. I have to actually make daily journaling a priority (a thing of importance in my life) in order to get it done.

So why am I posting this? I guess I'm posting it to encourage you.

If you are like me (that is, you get excited about a project and it lasts for a grand total of not very long before you lose interest and give up on the incomplete project) then take courage. You're not alone!

But if you want to finish it, and lack the motivation, here's my encouragement.