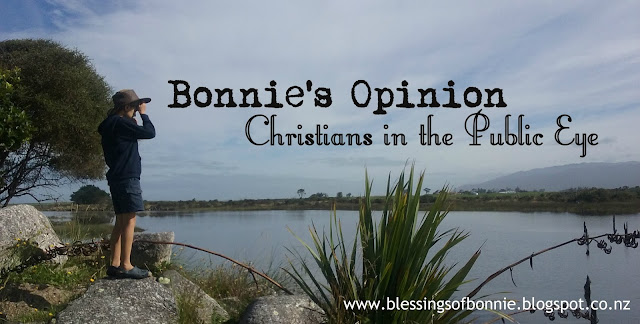 Today I'd like to discuss something important. It's about Christians in the public eye who have had scandals attached to them.

I'm thinking of some in particular. I won't name them here but I'm sure you've heard of some. You know - the Christians who look like they have their lives together and the whole world knows about them. Them suddenly - scandal! They are being unfaithful to their wife or 'come out' as a homosexual or it turns out they have been secretly pocketing church money... or something equally disgusting.

The thing is, in my opinion,  all Christians are called to be holy and to conduct blameless and pure lives.

"Therefore, with minds that are alert and fully sober, set your hope on the grace to be brought to you when Jesus Christ is revealed at his coming.  As obedient children, do not conform to the evil desires you had when you lived in ignorance.  But just as he who called you is holy, so be holy in all you do;  for it is written: 'Be holy, because I am holy.'”(1 Peter 1:13-16).

It is laid out pretty clearly, I think! Be holy because God is holy. That is the standard we are called to live up to.

Of course, we are not perfect. We slip up and make mistakes. We are still sinful humans who haven't reached heaven yet!

That's why God's grace and mercy is always available. We can fall on our knees before our King and come before him with a repentant heart. He will forgive us.

But we must have a repentant heart.

Because as soon as we start willfully sinning without an honestly repentant heart, we have turned our backs on Jesus. We have forgotten the price he paid to purchase our freedom. We are throwing his gift back in his face!

Now we come to the Christians in the public eye who get caught out when someone discovers what they have been doing in secret.

The Bible says our sin will find us out. We don't get away with sin forever. It has a way of coming out no matter how hard we try to hide it.

The thing with Christians in the public eye is that THEY ARE IN THE PUBLIC EYE. (Surprise!)

The world is watching them.

The world is watching all Christians, true. But they are watching Christians in the public eye with a magnifying glass. They are scrutinizing their every move.

But when they are caught out doing something that isn't holy and God-honouring, what does that do to the name of Christ?

It turns our God into a laughing stock in the eyes of the nations. It makes people go, "Oh, another pathetic Christian has had their hypocrisy uncovered."

This is why I think that Satan is desperate to 'get' the Christians in the public eye. Satan doesn't want those who aren't Christians. He already has them! It's the Christians he doesn't have! So he is after us... and what better way to do it than to discredit the name of Christ by tempting a Christian in the public eye, having them take the bait and watching them fall down amid sneers of derision from the world.

"Be alert and of sober mind. Your enemy the devil prowls around like a roaring lion looking for someone to devour" (1 Peter 5:8).

Yet it is nothing more than a scheme of Satan. And you know what?

We can do something about it!

The Bible talks about how we are the salt of the earth and the light of the world. We are a city on a hill. We spread Jesus's name. We are Christians just as much as Christians in the public eye are! We can do our best, with the Lord's help, to live Godly lives that exude the fragrance of Christ wherever we are.

Romans 15:30 and other Scriptures encourage us to pray for those in authority over us. That's our pastors and government, etc. And of course, we can be praying for Christians in the public eye that they would stand strong against the wiles of Satan and be able to use their lives to glorify our King to the world in which we live!

Email ThisBlogThis!Share to TwitterShare to FacebookShare to Pinterest
Labels: Bonnie's opinion, Christians in the public eye, my thoughts, scandals