So I didn't know much about Hanukkah until I came over here to live with Mr and Mrs Campbell and help at Above Rubies. They are Christians, not Jewish at all, but that doesn't stop them from celebrating some of the Jewish celebrations out of a love for God, a love for Israel and a love for excuses to celebrate!

Anyway today (January 1st) is the last day of Hanukkah. Now I don't know if you know much about Hanukkah or if (and how) you celebrate it. I'll quickly talk about what we did and then get into the story behind it which is in my opinion the interesting bit.


The Hanukkah candlestick is a nine candle menorah called the Hanukiah (hun-oo-kee-ah). It looks like this. 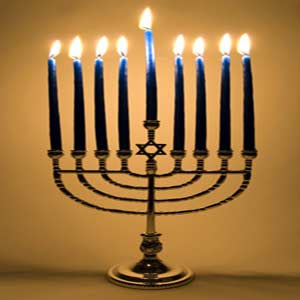 And the story behind Hanukkah?

You can read about the story yourself in the books of 1 and 2 Maccabees (found in the Apocrypha - the books Catholic Bibles include but Protestant Bibles often leave out). Or you can google "history of Hanukkah" and find a million different sites telling the same story. :) Or you can just keep reading because I've found a good telling of the story to paste here. (Pasted because I've only heard the story since I've been here and I would probably get something wrong if I tried to tell it! Haha). It's from here.

"In the year 168 B.C.E., the Syrian tyrant Antiochus Epiphanes sent his soldiers to Jerusalem. The Syrians desecrated the Temple, the holiest place for Jews at that time. Antiochus also abolished Judaism, outlawing the observance of Shabbat and the Festivals, as well as circumcision. Altars and idols were set up for the worship of Greek gods and he offered Jews two options: conversion or death.

On the 25th day of the Hebrew month of Kislev in 168 B.C.E., the Temple was renamed for the Greek god Zeus. A resistance movement— led by a priestly family known as the Hasmoneans, or Maccabees—developed against the cruelty of Antiochus. The head of the family was Mattathias, an elderly man. His son, Judah, became the chief strategist and military leader of the resistance. Though outnumbered, Judah Maccabee and his fighters miraculously won two major battles, routing the Syrians decisively.

Hanukkah, which means “dedication,” is the festival that commemorates the purification and rededication of the Temple following the defilement caused by the Greeks during their occupation of that holy place.

Originally, the eight-day holiday was intended to parallel the eight-day festival of Sukkot. The Books of the Maccabees made no mention of the legend concerning a small jar of oil that unexpectedly lasted for eight days. Only centuries after the Maccabees’ defeat of the Syrians did the story of the jar of oil—which has come to be a part of Hanukkah—appear in the Talmud.

According to the legend, when the Maccabees entered the Temple and began to reclaim it from the Greeks, they immediately relit the ner tamid (eternal light), which burned constantly in the Temple and has a parallel in our synagogues to this day. In the Temple, they found a single jar of oil, which was sufficient for only one day. The messenger who was sent to secure additional oil took eight days to complete his mission, and miraculously, the single jar of oil continued to burn until his return. The rabbis of the Talmud attributed the eight days of Hanukkah to the miracle of this single jar of oil."

Such a cool story, right?

From my perspective, my favourite part is that Hanukah means "Dedication". It's the Festival of Dedication, throwing back to when the Maccabees rededicated the Temple and purified it after it was defiled.

But it doesn't stop there. Hanukkah is a time for us to dedicate ourselves and repurify our lives. It's a time to confess our sin and re give ourselves over to the Lordship of Christ.

I think the Hanukkah story is a beautiful story and using it as an opportunity to dedicate ourselves again to God is a beautiful thing to do. Especially when Hanukkah coincides with the beginning of the year!

Have you heard the Hanukkah story before? Any thoughts?

Email ThisBlogThis!Share to TwitterShare to FacebookShare to Pinterest
Labels: American adventures, celebrate, Hanukkah, history, the Lord is faithful, the Maccabees