So there's this wonderful series of young adult fiction called Redwall. The author, Brian Jacques, wrote heaps of these books. They're great books. Most of them have a very predicable storyline - some group of baddies (usually foxes, stoats, weasels, rats, ferrets or some combination of those animals) attacks either Redwall itself, or the Badger fort of Salamandastron. A young woodland creature living in one of those fortifications (or sometimes its one who lives elsewhere, just to change it up a bit) must rise to the challenge, raise up an army of peaceful woodland creatures (badgers, hedgehogs, moles, mice, hares, squirrels, otters and shrews, usually), and lead that army to victory over the forces of evil that have invaded their peaceful home. Over the course of the story, many battles are fought, countless songs are sung, great feasts are consumed and new friends are made. They are great stories.

I'd say in most of the stories (I hesitate to say 'all' because I simply cannot remember now if I've ever read a book where this hasn't happened) a character turns up whose name is Martin the Warrior. In the stories towards the beginning of the Redwall timeline, when he is alive, he is simply portrayed as a great warrior who has to overcome some issues about his past. However, towards the end of the timeline, when he is dead (and this is where most of the stories are written) he 'speaks' to the woodland creatures, giving them guidance. He often tells riddles to creatures while they sleep, when they wake they've forgotten his words but the words come back to them later in the crucial moment. He seems to watch everything that goes on and provides guidance to the creatures that need it. There's a great tapestry of him hanging in the feasting hall of the Redwall creatures. They sort of regard him as the greatest of them, the lord, almost as a God, in some situations. 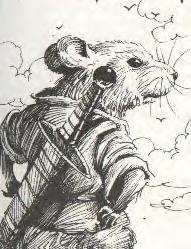 When I first encountered Martin the Warrior I was kind of like woah, who is this guy and what does he think he is doing? Talking to creatures when he's supposed to be dead... that's a bit dodgy!

But then I realized that although this is a completely fictional story, I think there are some parallels in Martin the Warrior that we can draw to our great God. Obviously, the two are very different (Martin's a mouse for goodness sake!) but there are a couple of similarities. And we read books like Narnia where there's a lion who provides a picture of Christ. Martin could provide one too, only, you'll have to use your imagination a wee bit more!

Proberbs 11:21
Be sure of this: The wicked will not go unpunished, but those who are righteous will go free.

God does not let injustice occur. While it may happen here on earth, in Heaven there will be a grand settling up of all accounts and God will fix everything. Each person will receive exactly what he or she deserves. God is the perfect just judge.

Martin practically dies but then comes back to life

This one will really require a stretch of the imagination, haha. :P In the book Martin the Warrior, Martin and his friends rally Mossflower's resistance forces and lay siege to Kotir (the evil fortress), knocking down its walls and ultimately flooding it, with Martin slaying Tsarmina (the evil cat) in a bloody duel. The warrior mouse suffers grievous wounds from this battle, but is ultimately nursed back to health.

Jesus died on a cross, having done nothing wrong. Martin nearly died because he gave his life for his friends and for the conquering of evil. The difference is, of course, that while Jesus did it with the consequence of saving the whole earth forever, Martin did it for saving the land of Mossflower from one evil force. And while Jesus was dead for three days, Martin did not actually die, being unconscious and in a critical condition for twenty days.

Romans 4:25
He was delivered over to death for our sins and was raised to life for our justification.
When Martin eventually dies late in life, his spirit acts as a guide to creatures in need of guidance

Martin will also speak in moments of crisis and give his charge some vital instruction to save their life. This reminds me of the Holy Spirit. The Holy Spirit gives us guidance and draws close to us in our hour of need.

John 16:31
But when he, the Spirit of truth, comes, he will guide you into all the truth. He will not speak on his own; he will speak only what he hears, and he will tell you what is yet to come.

After the battle is over, Martin and his friends construct Redwall Abbey in its place, forever a safe bastion for good creatures seeking respite from the wild world.

Redwall Abbey, to me, is a picture of the comfort and security we have in God. When storms arise, we are safe and secure in His arms. While His arms don't have buttresses and a wall around the outside, we are forever secure in Him. We aren't promised to never have trials, but He has certainly promised to be with us when we go through hard times.

The animals who lived in Redwall Abbey weren't promised a life free from adventure and hardship (in one of the stories an evil rat called Cluny the Scourge actually manages to capture the Abbey at one point). But their lives were secure.

Isaiah 43:1-3
But now, this is what the Lord says—he who created you, Jacob, he who formed you, Israel:
“Do not fear, for I have redeemed you; I have summoned you by name; you are mine.
When you pass through the waters, I will be with you; and when you pass through the rivers, they will not sweep over you. When you walk through the fire, you will not be burned; the flames will not set you ablaze. For I am the Lord your God, the Holy One of Israel, your Savior......

Have you ever thought about the books this way?
What parallels do you see between the Redwall books and/or Martin the Warrior to our lives as Christians?

By the way, just letting you know that my post of answers to all the questions I was asked is going up live on the 17th. If you want a question answered, better ask it before then! ;)